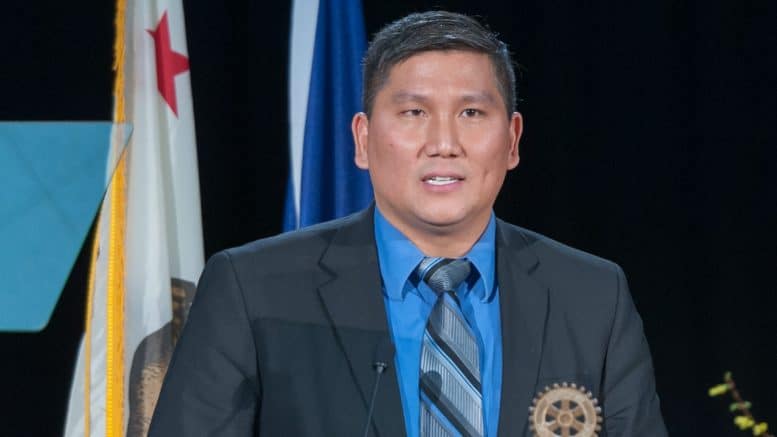 Mayor Darcy Paul at Wednesday's State of the City event.

The community gathered Wednesday for Mayor Paul’s first State of the City address. At a lunchtime event, co-hosted by the City, the Chamber of Commerce and the Rotary, Mayor Paul talked about the importance of volunteering. Then, in the evening, during a second, hour long speech about “the issues of Cupertino and our day”, Paul dedicated more than half of his time to the future of Vallco.

With the community input program for Vallco’s Specific Plan set to begin on Monday with a kick-off meeting organized by lead consultant Opticos, the Mayor took the occasion to set his expectations with what he called his “personal preference” for Vallco’s redevelopment in his evening speech. In his view, the parameters for Vallco’s redevelopment call for dramatically less space than anything under consideration through its current zoning and the range of options being studied by the community input process. Mayor Paul said that “the limits of freedom and functionality would seem to be around 1.2 million square feet,” which is about the size of the rentable retail space in the current mall, with at least half of that square footage dedicated to retail.

This marks a dramatic departure from fellow City Councilmembers’ position desiring more housing to be accommodated by the site than was envisioned under Measure D. Last October, when Vallco submitted a formal request to study project alternatives for Vallco, previous Mayor Savita Vaidhyanathan said Vallco “could be a signature project for our city and it should be something our residents want to contribute their thoughts to and be proud of in the end.” At the end last year, Vice Mayor Rod Sinks added “Given the acute housing shortage in Silicon Valley, I think it is appropriate to consider a project with less office and more housing than we would have gotten with The Hills.”

Mayor Paul’s remarks on housing came as a surprise, since just a few months ago when some accused Mayor – then still Councilman – Paul and Councilmember Steven Scharf of trying to shortcut the City’s process to restrict redevelopment of the site. The move was considered anti-housing by many and Paul reportedly expressed support to 2,400 units of housing on the site to Senator Scott Weiner.

For his part, Mayor Paul seemed to acknowledge the lack of housing with his envisioned plan saying “What does that leave out, if we’re talking about retail and office? Right, residential space.” Despite continuous reports about the region’s housing and affordability crisis, including the conclusions of a City-sponsored expert panel that a lack of new and affordable housing units will threaten the quality of life for all residents, Darcy Paul called the housing circumstances in Cupertino “not dire” and stated the facts show that Cupertino has “historically been quite responsible insofar as meeting our obligations to the larger community where keeping our number of jobs and housing units balanced.”

Over the last months however, many community members have expressed support to redevelop Vallco, because it offers an opportunity to help alleviate the housing crisis. Just a few weeks ago, a Cupertino Today poll confirmed that more than half of residents said the cost of housing is the biggest challenge of living in Cupertino. In a different poll about the future of Vallco, nearly 80 percent said they want to see redevelopment at the mall with a more significant housing component. The need for more housing developments in the City was confirmed a few weeks ago by Cupertino Union School District’s demographer, who stated that extra and affordable housing units were crucial to address the City’s declining school enrollment figures.

As for the property owner, Sand Hill issued a notice of the Monday night community engagement meeting urging supporters of housing to express their opinion on the matter. “By ignoring the need for housing at Vallco – Cupertino’s best opportunity to provide real solutions to the housing crisis – the Mayor fails to acknowledge the single greatest challenge facing our region and the City of Cupertino, which happens to be the region’s most unaffordable city. Compelled to address this unprecedented housing crisis, we requested that the City analyze alternatives to add significant housing through a Vallco Specific Plan and reduce housing demand generators like office and retail uses,” an email from Sand Hill’s Managing Director Reed Moulds states.

Meanwhile, the Apple Insider has taken to advocate for more housing on the Vallco site, asking Apple employees, “most of whom can’t afford to buy housing in Cupertino even with professional salary, to push for new housing” at Vallco. All employees are actively encouraged to become the counter-voice of Cupertino’s anti-housing activists and “get involved in planning discussions that begin next Monday.”

You can watch Mayor Paul’s State of the City speech on the City’s video channel.