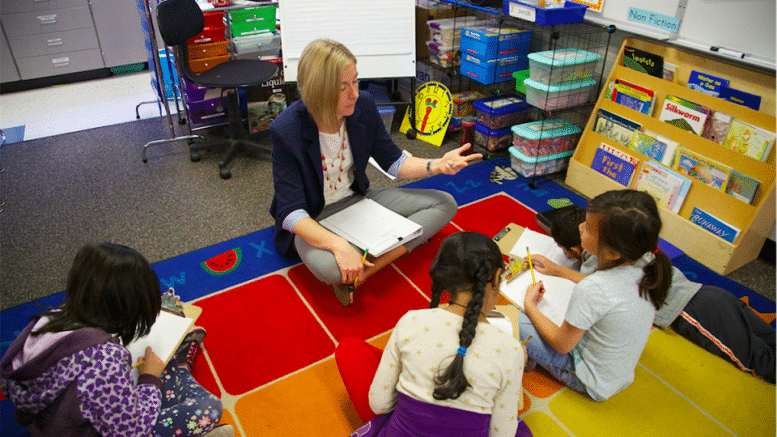 With soaring housing prices pushing young families out of Cupertino, future housing developments are being viewed as the remedy for fiscal holes caused by declining enrollment at local schools.

At Tuesday night’s Cupertino Union School District Board meeting, consulting demographer Tom Williams warned that a lack of new and affordable housing will continue the drastic trend of falling enrollment in the district, which is currently facing a $5 million budget shortfall as well as a projected loss of more than 1,200 students in the next five years, including a loss of 478 in just the next year.

An “explosion” in housing prices since 2013 has accelerated the decline, according to Williams. “It has become much harder for young families to come in than it was about five years ago,” he said.

Declining enrollment negatively impacts the amount of per-pupil state funding the district receives, along with contributions by families, causing the district to struggle to afford existing employees and programs. Student population declines will be mostly felt in the southern/western part of the Cupertino Union School District, according to Williams.

“I’ve been doing this since the eighties; trends were always the same,” Williams said. “As the economy got better and as there were more jobs, people had more children. Not now. I see a radical change now. Even with all the money that is being made, people still can’t afford to live here.” 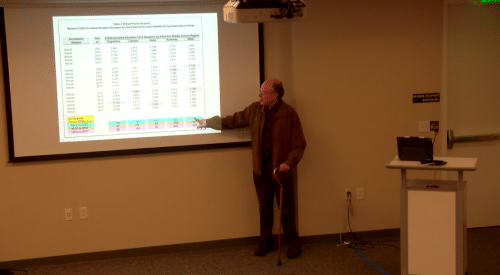 Demographer Tom Williams at yesterday’s School Board meeting: “Unless we’ve got a lot of new and affordable housing coming up, enrollment numbers will keep going down. It has become much harder for young families to come in than it was about five years ago.”

The solution may come in the form of future housing developments. Currently, 1,900 units are projected to be added in the school district in the next five years, which are forecast to provide 584 students by 2022. Future figures are speculative, however, because they hinge on the number of units that will come from the development proposal for Vallco Mall, which can include anywhere from roughly 400 to 2,000 housing units.

A previous proposal for about 800 housing units at Vallco was rejected at the last elections. “There may be a pending need, however, to approve a much larger unit total there because Cupertino has not been achieving the State-mandated new housing levels in recent years,” according to Williams’ report.

Williams is referring to California Senate Bill 35, which became law on January 1 and could require that Cupertino approve housing plans that meets basic city requirements. “Under that plan, there could be over 2,000 dwelling units at Vallco,” the report stated.

In October 2017, Sand Hill, the owner of Vallco Mall, asked the City to study project alternatives for the site that would reduce the amount of office space from Sand Hill’s earlier plan called The Hills at Vallco and increase the amount of housing. In a recent poll by Cupertino Today, 37.5 percent voted in favor of a mixed-use plan like The Hills, but with more housing, while 5.4 percent wanted a full-on housing-centric plan for Vallco, with a maximum amount of housing units and a minimum of commercial and office space.

At the end of last year, the City of Cupertino kicked off the public review process for a Vallco Specific plan, by hiring a group of consultants to examine different aspects of the proposed plans for Vallco.

Our staff reached out to the CUSD School Board Members and Superintendent Dr. Baker but did not hear back before the publication time. We will update the story as soon as we hear back.