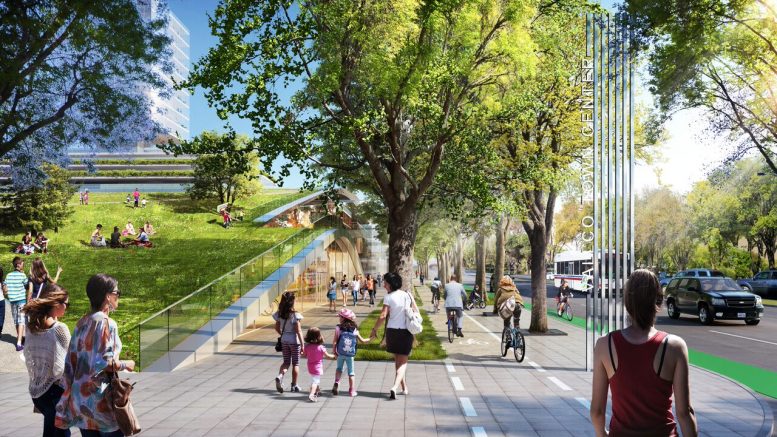 Vallco Town Center features 2,402 housing units – half of those will be set aside as affordable housing – along with a 30-acre rooftop park, two town center plazas, office space and a retail and entertainment district anchored by a new state-of-the-art AMC Theatres facility, bowling alley and ice facility.

Sand Hill Property Company came with a big and unexpected announcement today. Amid the ongoing Vallco Specific Plan process, led by the City, Sand Hill submitted a new vision for the dead mall, called Vallco Town Center. The new project application features 2,402 housing units – half of those will be set aside as affordable housing – along with a 30-acre rooftop park, two town center plazas, office space and a retail and entertainment district anchored by a new state-of-the-art AMC Theatres facility, bowling alley and ice facility.

Vallco Town Center complies with the requirements of new State Law SB35 for streamlined approval. Residential development projects that hold at least two-thirds residential space and comply with the affordable housing minimums that are specific to each city are eligible for a fast-tracked process. Vallco Town Center will be one of the first projects in California to use this new law.

“This will be a world-class development,” said Reed Moulds, managing director at Sand Hill Property Company, owner of the dying Vallco Mall that is among many shopping centers nationwide struggling to retain relevancy amidst the rise of online shopping.

The Vallco Town Center concept is similar to the previous Hills at Vallco plan proposed in 2015, but includes less space for office and retail and far more housing units to address the growing housing crisis in Cupertino, where even highly paid engineers at the Apple campus struggle to afford a home. Cupertino currently provides just one affordable housing unit for every 14 of its low-income jobs. “This housing and affordability crisis is real and getting worse. It is affecting us on both business and personal levels and requires action now,” said Moulds.

While the Hills at Vallco plan provided 800 housing units, the new plan provides more than 2,400, both for sale and for rent, including 1,201 units that “will be affordable to low and very low-income households at rents expected to be a fraction of market rates,” Moulds said.

The new plans offer about 1.81 million square feet of office and 400,000 square feet for retail. The plan includes diversified uses for office that include research and development, medical office and allied labs, and reduces retail from the previous plan’s 640,000 square feet “to better reflect evolving and real market conditions,” the property’s owners said.

The new proposal could run “in parallel” with the ongoing Vallco Specific Plan process, a community-driven and City-led planning process for Vallco that started at the beginning of 2018, a few weeks after Sand Hill had requested that the City relaunched the process. In the press release, Moulds said, “It is our sincere hope that the City process is successful in yielding a project that is derived from the community and addresses housing while also being viable and sufficiently robust to withstand any legal and ballot box challenges in a reasonable time frame.”

The mall’s owner says it fears that the “local Political Action Committee” know as Better Cupertino has worked to halt redevelopment at Vallco over the past several years will continue to seek to delay the community input process. Just recently, local anti-housing organization Better Cupertino challenged the City process, as they held a community forum on March 10 and have been using the Vallco Specific Plan online comment section as a platform to discredit the project consultant’s work, the City process and even threatened with ballot box challenges.  Referring to some of those actions, Vallco’s owners decided to submit an SB35 project application in order to prevent from “a high likelihood of further efforts to frustrate and delay any community-supported, market-feasible project.”

After years of uncertainty, Sand Hill now secures that it will actually be able to build a mixed-use project on the site. The mall’s owner however seems to leave an opening for a successful outcome of the Specific Plan process, which could result in a viable, community-supported alternative plan for the Vallco development site. “However, absent such an alternative, our SB35 application offers a viable, housing-focused plan for the dead mall that will allow us to get started on a feasible project with a reasonable schedule of completion.”

In a press release, the City of Cupertino says the Vallco Town Center application is still under review, but “the owners of the Vallco property have requested that the Specific Plan process continue.” The City encourages community members to continue to stay engaged in the design and planning process of the Vallco Special Area. Cupertino Today also reached out to the members of the Cupertino City Council and Better Cupertino for a reaction. We haven’t heard back before publishing this article, but will update as soon as we receive a response.

2 Comments on "Sand Hill uses State Law to launch new plans for Vallco with 2,402 residential units, half of which affordable"