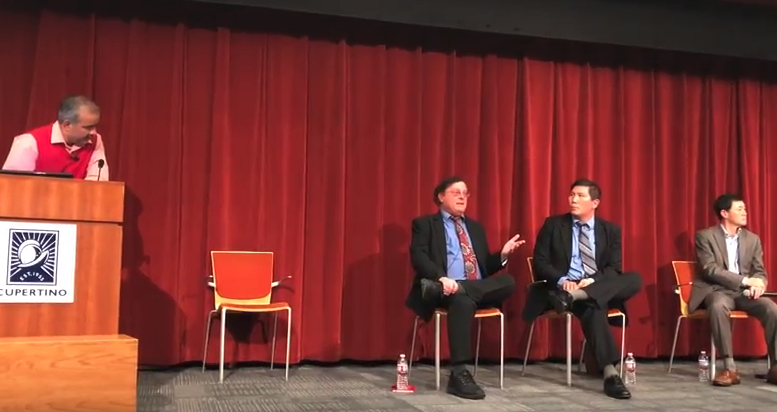 The forum, attended by both anti-housing and pro-housing advocates, culminated during the public input portion of the meeting where both groups shared their concerns.

Laura Clark, executive director of YIMBY Action, expressed that her generation feels “locked out of” jobs and opportunities in the area due to skyrocketing housing prices. Clark’s concerns led to a strong response from the NIMBY group, including this answer from a City Councilmember: “I have to say when I graduated from college I couldn’t live where my parents lived either and I didn’t go to a council meeting and tell someone that they owed me a house in that area,” responded Councilmember Steven Scharf, adding that he didn’t believe they he had the right to ask the local City Council to do something about it.

Scharf’s comments drew a round of applause at the community forum, which hosted Scharf and Mayor Darcy Paul as “honored guests”. The Mayor famously called the housing situation in Cupertino “not dire” during his recent State of the City address.

When Clark asked panelists at the forum what they think they owe her generation, audience members began to shout and demand that she say what city she is from. One attendee requested IDs be checked to confirm where participants are from.

These were just some of the comments at the lively meeting. The evening’s host organization, Better Cupertino, is known for being among the most vocally opposed to redevelopment efforts, including those at Vallco and The Oaks. The group was the driving force behind last election’s failed Measure C, which sought to keep the mall as a place for retail only. It held Saturday’s “Forum on City Planning” with an aim on discussing transportation, retail and housing.

Better Cupertino held the forum amidst the ongoing City-led community process for the Vallco Specific Plan, which continues with a public presentation on Tuesday, March 13.

The forum was Live-Tweeted by YIMBY supporters, who shared quotes, photos and their personal opinions about the forum.

Apple engineer – I don’t want to be on the highway. I would be a resident at this meeting if I could afford to live in Cupertino #HousingCupertino

Mayor Paul: "Our region is divided into jurisdictions. And if one jurisdiction is doing it's part, then well…

I think we need to do what's right for Cupertino."

This is literally why we can't have nice things.