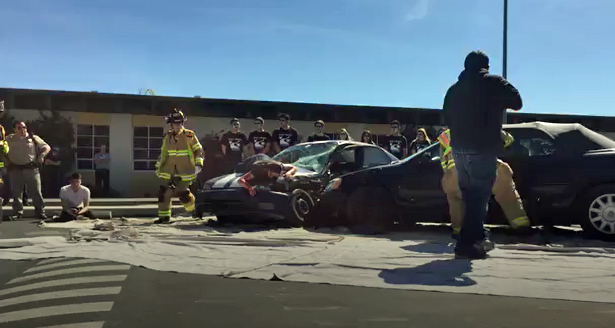 A drinking and driving crash simulation took place on March 27 at Homestead High.

This emergency response to a crash at Homestead High in Cupertino on March 27 was thankfully only a simulation, but it was impactful nonetheless.

Crews from the Santa Clara County Fire Department’s Cupertino Station, along with the California Highway Patrol and Santa Clara County Sheriff’s Office, staged a response to a drinking and driving collision on campus as part of the two-day “Every 15 Minutes” program for high school juniors and seniors.

The program aims to be dramatic and emotional to remind teenagers about making good choices involving alcohol, and how others may be affected by their decisions.

“Today’s portion of the program included a realistic simulation of a fatal vehicle accident, caused by impaired driving,” according to Santa Clara County Fire.