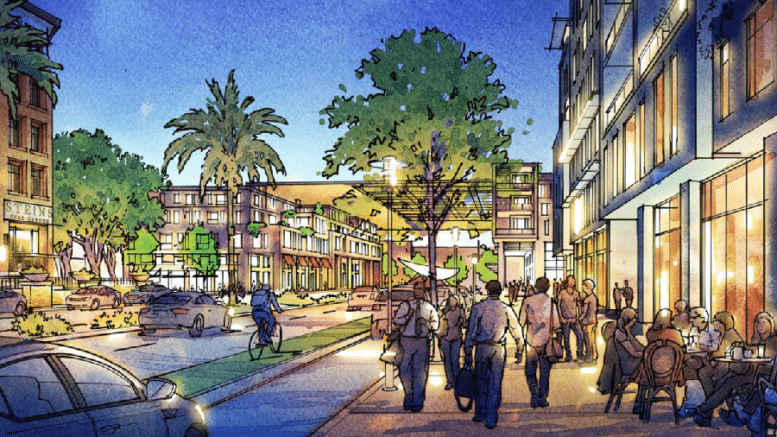 Photo courtesy of the City of Cupertino's Public Review Draft of the Vallco Specific Plan.

With just hours leading up to the Cupertino City Council’s review of the draft Vallco Specific Plan, Sand Hill Property Company announced in an email newsletter on Sept. 14 that they would like to add to the Specific Plan’s Development Agreement.

The mall owner wants to set aside 40 Extremely Low Income (ELI) housing units for the developmentally disabled at the Vallco site and contribute an additional $4.75 million to the Cupertino Union School District.

Pilar Lorenzana, Deputy Director of Silicon Valley at Home, commended Sand Hill for proposing 40 ELI housing units for people with developmental disabilities, and encouraged the City to commit to housing for all people in Cupertino. She said, “In order to create a meaningful alternative to the SB 35 plan, leaders in Cupertino must ensure the Specific Plan provides significant housing opportunities for people of all incomes and abilities.”

The Specific Plan was released for public review in August and aims “to transform the existing Vallco Shopping Mall site into a walkable, mixed-use district anchored by retail, entertainment and cultural uses, and supported by new neighborhoods, employment areas and public open spaces,” according to the public draft, which is now available for review on the City website.

The Plan was crafted with extensive community engagement to identify the concerns and aspirations of Cupertino residents and workers, according to the City.

The Sept. 5 Planning Commission meeting advanced the plan with a 4-1 vote, with Commissioner Jerry Liu dissenting. His dissent related to concerns about CUSD’s share of the community benefit package negotiated by the City. Sand Hill’s addition to the Specific Plan’s Development Agreement now includes an increased donation to the high-achieving school district, totaling $14.25 million if the Development Agreement were approved by the Council and Sand Hill Property Company went forward with the project.

The Specific Plan is an alternative to Sand Hill Property Company’s Vallco Town Center plan, which was determined in June to be compliant for streamlining eligibility under the requirements of State Law SB35. The SB35 plan features 2,402 housing units, half of which will be designated as affordable housing, 1.8 million square feet of office, a 30-acre green roof and 400,000 square feet of retail.

According to a letter released by Sand Hill Property Company on Sept. 14 the company wants to move forward with the plan that “has the broadest community buy-in,” and is open to both the City-led and the SB35 plan.