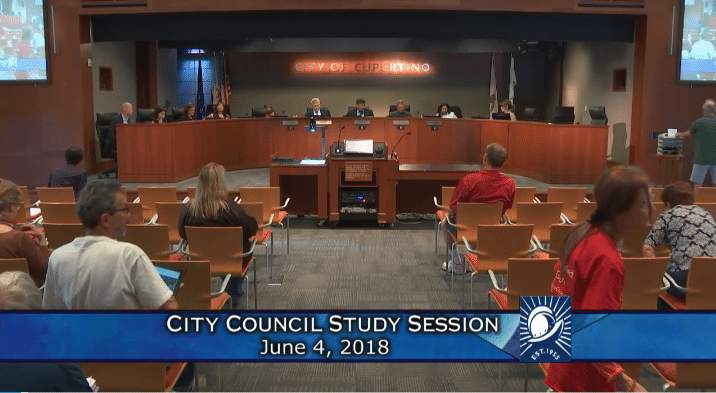 The June 4 Vallco Specific Plan study session was the first opportunity for the City Councilmembers and the public to share their thoughts about the community process.

Progress was made towards the Vallco Specific Plan process at last night’s City Council study session, where the public and Council shared their input on what they want to see happen at Vallco mall. This was the first opportunity for the City Councilmembers to publicly share their thoughts about the ongoing community process.

Dan Parolek of consultant firm Opticos Design presented the results of both design charrettes that were held in April and May, as well as brief overview presentations from the City’s economic and traffic consultants.

City Councilmembers raised several questions about the future of Vallco following the consultants’ presentations.  Vice Mayor Rod Sinks asked Opticos Design for clarification about multiple level retail proposed in their simplified model, and showed interested in the concept of cohousing, citing that it has been succesful in neighboring cities such as Mountain View.

Savita Vaidhyanathan shared her gratitude for being able to “negotiate” the future of Vallco, as development at the site has been an issue her entire life. She said, “We want something that our community will be proud of,  something that will make people all over the Bay Area say ‘Oh finally, Cupertino did it right.’” She expressed the importance of density in Cupertino, as she believes it will bring mass transit and will eliminate traffic from neighboring cities.

The Draft EIR is available and accessible online, here.

The next meeting regarding the Vallco Specific Plan will be on Tuesday, June 19 from 5 p.m. to 6:15 p.m. at Cupertino Community Hall for the public and Council to comment on the Draft EIR. For more information about the Specific Plan process, click here.