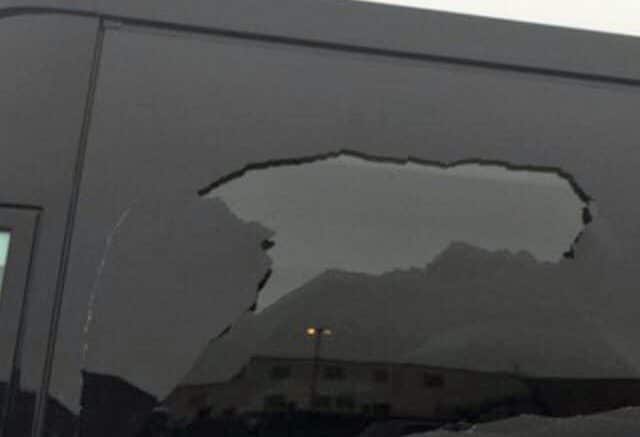 Photo of a vandalized charter bus provided by the California Highway Patrol.

A $10,000 reward is being offered for information leading to the arrest and prosecution of those responsible for recent pellet gun shootings on Bay Area charter buses, according to the California Highway Patrol.

Meanwhile, the CHP tells ABC7 News it is using a decoy buses and unmarked cruisers in a concerted campaign to catch whoever is attacking the buses along the I-280 corridor from Woodside to Cupertino.

“There have been 20 strikes in the past 45 days,” the news station reported, adding the CHP is getting help from the FBI and also has a description of a suspect vehicle.

Bus company Storer San Francisco is offering the $10,00 reward and working closely with the CHP and other law enforcement agencies, the CHP added.

The attacks were first reported in mid-January, when multiple charter buses carrying workers from companies such as Apple and Google suffered damaged windows as they traveled down the highway during both the morning and evening commutes.

Anyone with information is asked to call 1-800-TELL-CHP (1-800-835-5247) or to send a private message on this Facebook page. Information can be reported anonymously.