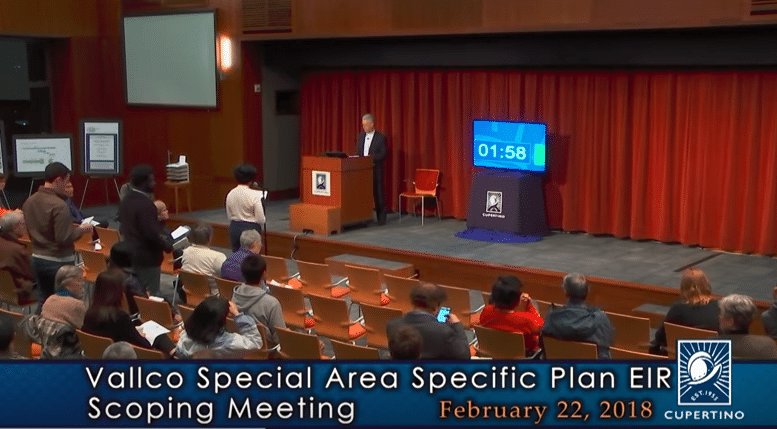 The community gathered on Thursday Feb. 22, 2018 for a Vallco scoping session.

The latest in a series of public review meetings for Vallco occurred in the form of a “scoping session” at Cupertino Community Hall on Thursday February 22, where community members were given the opportunity to share their comments and concerns about the scope and content of the Environmental Impact Report (EIR) that is being prepared alongside a new Specific Plan for the 58-acre site.

While the City is studying the original General Plan-compliant “Hills at Vallco” application from 2015 – a project that calls for up to a 600,000 square feet of retail, 2,000,000 square feet of office space, 800 housing units and 339 hotel rooms – last week’s meeting also saw the introduction of various project alternatives to be studied as well in the EIR, as is required by law.

Three alternatives that are up for study were briefly touched on, without releasing any formal numbers, square footage or other details. Those project alternatives are:

Cupertino Today reached out to the City’s planning department to get some more background regarding these project alternatives. According to Cupertino Senior Planner Piu Ghosh, “the General Plan currently allows residential development at the site of up to 35 dwelling units per acre.” According to City calculations revealed at the scoping session, the “General Plan build-out” (alternative 2) will have approximately 2,600 or 2,640 housing units. However, using the formulas that include the state density bonus, the City’s ballpark estimate of residential will likely increase to upwards of 2,800 residential units.

According to a source familiar with other housing projects in the region, the 2,640 housing units in the “General Plan build-out” alternative could easily result in a project size around 5,000,000 square feet. Total square footage could even be bigger, if more than 2,640 units would be allowed.

Both the “General Plan build-out” (alternative 2) and the retail and residential only plan (alternative 3) will evaluate the potential development on the site as if there were no housing allocation limitations. Besides housing, the “General Plan build-out” alternative would also include retail and office uses. “It would also have a retail and commercial component of at least 600,000 square feet. The program for other non-residential uses will likely be based on the economic feasibility of developing this alternative,” said Piu Ghosh. The need for project feasibility was also stressed during last week’s scoping session.

In October of last year, Vallco’s owner Sand Hill Property Company submitted a formal request to the City to restart the process to redevelop the empty mall. The request came one year after ballot Measure D, which supported Sand Hill Property’s office-centric The Hills at Vallco plan, and counter-Measure C, a ballot initiative that sought to preserve Vallco as a retail-only mall, both fell short of votes. On Nov. 21, the City Council authorized the preparation of a Specific Plan, which proposes a “vibrant mixed-use town center” at Vallco. The first community meetings of the Specific Plan process were kicked off earlier this month. The next Vallco Special Area Specific Plan meeting will be the Existing Conditions Presentation on March 13, 2018.

1 Comment on "Vallco could bring up to 2,640 homes and 5 million square feet of total development"