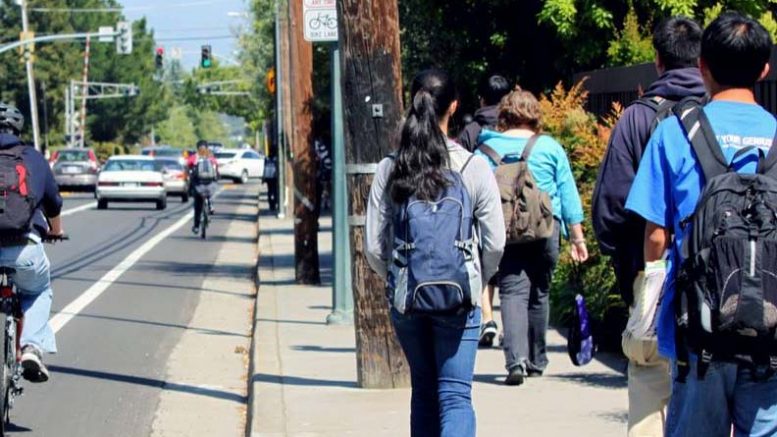 About 71-percent of the 137 vehicle-vs-pedestrian injury crashes in Cupertino between 2005 and 2014 occurred on just eight city streets, according to data presented in the city’s draft Pedestrian Transportation Plan.

During the 10 year period, Steven Creek Boulevard saw the most pedestrian-involved injury crashes with 39; Stelling Road had 18; Miller Avenue/Wolfe Road had 15;  Homestead Road had 12;  DeAnza Boulevard had 11; McClellan Road had 7;  Bollinger Road had 6; and Foothill Boulevard had 5, according to injury crash data cited in the draft plan.

Nearly 4-percent of the crashes were fatal, while 17.5-percent resulted in serious injury, 35-percent moderate, and 43.8-percent minor. Crashes that didn’t result in injury or were not reported were not part of the tally.

The draft Transportation Plan cites “ample opportunity” to improve pedestrian safety on Stevens Creek Boulevard, where 29 of the crashes over the 10-year period occurred at or very close to intersections. In 29 of the 39 crashes on Stevens Creek, the drivers were to blame for failing to yield to pedestrians, the report notes.

“These eight streets are considered “High Injury Corridors” and improvements to these streets could significantly reduce motor vehicle and pedestrian accidents in Cupertino,” according to the Draft Pedestrian Transportation Plan, which recommends a number of projects in the coming years to advance pedestrian safety in the city.

On Dec. 19, the City Council is scheduled to vote on whether to adopt the draft plan, which is an update from a plan established in 2002. The latest draft has been recommended for council adoption by the Cupertino Bicycle Pedestrian Commission (BPC).

Continue to follow CupertinoToday.com for more details on the plan’s recommendations prior to that meeting.