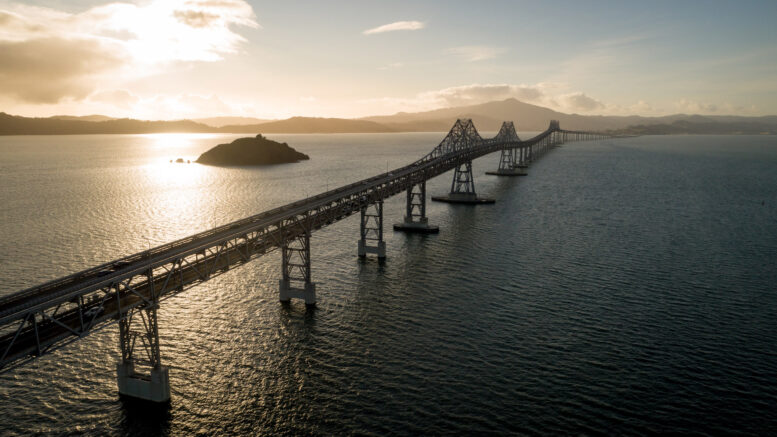 The Bay Area Toll Authority (BATA) will mark the New Year by raising tolls at state-owned toll bridges throughout the region. Two-axle cars and trucks, as well as motorcycles, will now pay $7 (up from $6) starting Jan. 1, 2022 at the San Francisco-Oakland Bay, Antioch, Benicia-Martinez, Carquinez, Dumbarton, Richmond-San Rafael and San Mateo-Hayward bridges.

Vehicles with three or more axles will also see their tolls increase by $1 starting Jan. 1, 2022 at the aforementioned bridges, said BATA, equating to $17 for three axles, $22 for four-axles, $27 for five axles, $32 for six axles and $37 for combinations with seven or more axles.

The peak-period toll discount will continue for motorcycles, carpools and qualifying clean-air vehicles crossing any of the state-owned toll bridges on weekdays from 5 a.m. to 10 a.m. and from 3 p.m. to 7 p.m. as part of Senate Bill 595 and Regional Measure 3, per BATA. This discounted toll is set to increase to $3.50 Jan. 1, 2022 (from the current $3). BATA advises that this category of drivers should use FasTrak® to electronically pay their tolls, as well as a designated carpool lane at toll plazas.

BATA said a 50-cent toll discount for two-axle vehicles crossing more than one of the state-owned toll bridges during weekday commute hours of 5 a.m. to 10 a.m. and 3 p.m. to 7 p.m. has been established by Senate Bill 595 and Regional Measure 3. Drivers must pay their tolls electronically with FasTrak® and will see the discount applied to their second toll crossing of the day. Those carpools, motorcycles and qualifying clean-air vehicles that take a toll crossing during a second peak-period in a single day will receive an additional 25-cents off the already-discounted carpool toll.

Those needing to get FasTrak® toll tags can do so at Walgreens and Costco stores, online here, via phone at 1-877-229-8655, by dialing 511 (ask for FasTrak at the prompt) or in person at the FasTrak® customer service center at 375 Beale St. in San Francisco.

The Jan. 1, 2022 toll increase collections will be placed into an escrow account managed by an independent trustee, said BATA, due to a legal challenge to Senate Bill 595 and Regional Measure 3 that is pending with the California Supreme Court. BATA said if it prevails in the litigation, the funds will be applied toward BATA-approved programs.

The Regional 3 expenditure plan encompasses major projects, according to BATA, including freeway interchange improvements in Contra Costa County, expansion of the San Francisco Bay Ferry Service, the purchase of BART cars and the extension of the BART system from Berryessa to downtown San Jose and Santa Clara, a direct freeway connector from northbound U.S. 101 in Marin County to the Richmond-San Rafael Bridge and upgrades to the Dumbarton Bridge corridor—to name a few.

BATA administers toll revenues from the Bay Area’s seven state-owned toll bridges and is directed by the same policy board as the Metropolitan Transportation Commission (MTC). Learn more about BATA here.