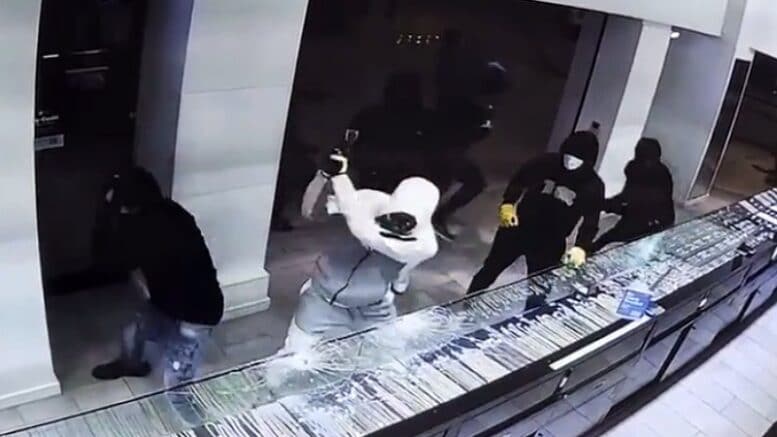 Image from video released by Concord Police Department of the smash-and-grab robbery of a jewelry store at Sun Valley Mall on Nov. 16.

Seven California district attorneys have formed an alliance with each other, local police, and state law enforcement agencies with the aim of combatting the recent increase in organized retail theft.

“Each office has pledged a prosecutor to collaborate and participate in the joint effort,” according to a joint statement released Tuesday by the district attorneys.

The alliance among DAs follows incidents across the Bay Area over the past week during which mobs of thieves brazenly stormed into businesses and made off with merchandise.

On Sunday night, groups stormed the Lululemon store in Santa Row, making off with about $40,000 in merchandise. Also Sunday, a sunglass store at Valley Fair was robbed of over $7,000 in merchandise, and on Tuesday, two suspects were arrested on suspicion of taking $2,000 worth of merchandise from the women’s Macy’s at the same shopping center. You can read more about the South Bay incidents here.

Similar incidents have occurred recently in Walnut Creek, where dozens of thieves stormed a Nordstrom store on Saturday, and also in San Francisco, Oakland, Fairfield, Pleasanton, Hayward, San Leandro, and San Jose. KPIX 5 has complied a timeline of recent incidents here. In addition to high-end jewelry and clothing stores, cannabis dispensaries have also been targeted.

The new DAs alliance aims to hold more suspects accountable via the sharing of data, crime analytics and pooled investigative tools. The DA offices say they’ll continue to collaborate with local retailers and state representatives to “ensure statutes that cover organized theft rings are enforceable and improves safety for consumers.”

“California has seen shifts in crime trends and tactics, and Bay Area prosecutors are forming this partnership to meet the moment,” said Cristine DeBerry, Executive Director of the Prosecutors Alliance of California. “Partnerships like [the DA’s alliance] reflect the need to implement modern solutions to modern problems. These crimes happen quickly, and they may not be caught in the act. Through information sharing and coordination, there will be greater likelihood of arrests and accountability than everyone working in isolation.”

Witnesses of organized retail theft can also play a significant role in cracking down on organized retail theft, according to the California Highway Patrol’s Organized Crime Task Force. The agency advises against intervening in the crime, but asks the public to note what the people involved looked like, and, if possible, obtain a license plate and vehicle description. Shoppers should report suspicious activity to store managers or the police when safe to do so, and also submit photos and video of the suspects or criminal activity as long as that can be done safely.