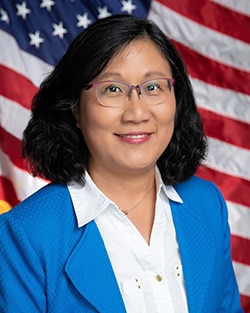 In Tuesday’s Cupertino City Council meeting, Vice Mayor Liang-Fang Chao further clarified remarks she made on the Chinese Exclusion Act that ignited the community earlier this month, but fell short of a formal apology, disappointing many local leaders who had called for her to do so.

The issue began in early November, in an email thread sent to over 2,000 Cupertino parents in an unofficial “CUSD Parents” Google group. Chao said, “The Chinese Exclusion Act was not even based on race, since only Chinese laborers are excluded.”

“It was really a labor issue where American laborers wish to keep cheaper Chinese laborers out, for good reasons,” said Chao in a Nov. 5 email. “We are doing similar things today, through the H1 visa process. We don’t want to give work visas to people that will take American jobs.”

In an email to the Bay Area News Group, Chao further attempted to clarify her words. “Let me be clear, the Chinese Exclusion Act was racist. I have never said it was not, ever. My point in the middle of a discussion on the suitability of critical race theory in K-12 education was that the Chinese Exclusion Act was not only driven by racism, but also driven by labor-related considerations at the time.”

Calls for an Apology
Despite Chao’s previous clarifications, several local leaders called for Chao to issue a formal apology at Tuesday’s City Council Meeting—which did not happen.

Gilbert Wong, former mayor of Cupertino and current president of the Organization of Chinese Americans of Silicon Valley, commended Chao for clarifying that the Chinese Exclusion Act is racist, but said issuing a public, formal apology is particularly important in the “post age of Donald Trump” where misinformation can run rampant.

Neil Park-McClintick, the chair of social justice organization Cupertino For All, called for Chao to apologize for two specific remarks, as well as pledge to “more carefully choosing her words and fact check her claims given her status as a public official.”

“Out of context”
At Tuesday’s City Council meeting, Chao said the media and political opponents took her words out of context. “I’m sorry that many people were misled by what they read in social media or headlines in the print media,” Chao said at the meeting. “You’re upset because you’re against racism. So am I.”

Chao, who is in line to become mayor in December and is up for re-election in 2022, continued: “In this instance, racism has been manipulated again for political gains by taking snippets out of a long discussion about K-12 education in a members-only local parent group,” with the goal of bringing down “an outspoken Chinese American woman.”

Cupertino’s population is more than two-thirds Asian and Asian American.

The majority of public speakers at Tuesday’s meeting defended the vice mayor, as did most of the comments in more than 50 pages of comments emailed to the council ahead of the meeting.

“Her comments have been twisted, and the media is feeding words into her mouth, and it’s just not fair,” said C.C. Zhou, a Cupertino resident who spoke at the City Council meeting.

Other community members were not satisfied with Chao’s remarks.

“I believe you should take accountability for that and be more careful in the future — and be honest about what you said as well,” said Park-McClintick, who attended the meeting. “Those are direct words. There is no context. The context doesn’t justify what you said.”