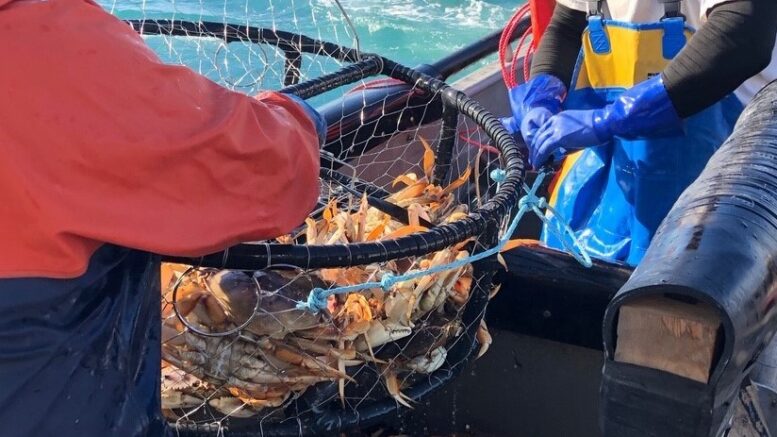 The start of commercial Dungeness crab season off the Bay Area coast has been delayed beyond the anticipated Nov. 15 opening date after aerial surveys last month noted the presence of humpback whales and sea turtles, which can become entangled from trap gear, the California Dept. of Fish & Wildlife said Monday.

CDFW said it would conduct another risk assessment on or before Nov. 22.

Commercial crabbing season in Fishing Zones 3 and 4, which span from the Sonoma/Mendocino county line to Lopez Point in Monterey County, had been slated to open Nov. 15 until the state announced the delay. State zones south of Lopez Point are set to open for commercial crabbing on Nov. 15, while zones north of the Sonoma/Mendocino county line are scheduled to open Dec. 1.

Meanwhile, the recreational take of Dungeness crab using crab traps in Fishing Zones 3 and 4, originally scheduled to open on Nov. 6, has also been restricted due to the presence of humpback whales and sea turtles. Recreational Dungeness crab fishing using other methods such as hoop nets and crab snares is not affected by the restriction and is allowed statewide starting Nov. 6.

This is the first time recreational crabbing is subject to similar measures as commercial crabbers to help protect whales and sea turtles, according to CDFW Director Charlton Bonham.

Photos courtesy of the California Dept. of Fish & Wildlife