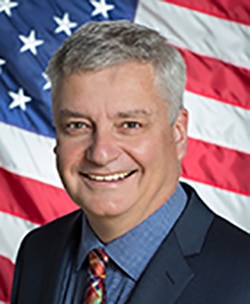 In advance of a potentially blockbuster Cupertino City Council meeting, Councilmember Rod Sinks is calling out his colleagues.

Sinks, in a post to his Facebook page Tuesday afternoon, speculated how his colleagues, Councilmember Jon Willey and Vice Mayor Liang Chao — elected last November with the support of no-growth forces, will vote on a controversial Vallco Town Center item Tuesday evening.

“They won with a promise to put the Vallco Specific Plan on the ballot ‘so that every voter has a say.’ Will they honor that promise at the council meeting tonight? Or unilaterally rescind it?,” Sinks said in the post.

The City Council meeting, set for 6:45 p.m. at City Hall, 10350 Torre Avenue, is likely to feature a lengthy debate on the redevelopment of Vallco Town Center.

Last September, the City Council adopted a series of resolutions approving changes to Cupertino’s General Plan that approved the ‘Specific Plan’ for the redevelopment of Vallco Town Center.

A main item on the council’s agenda are three referendum petitions, submitted to the council by Better Cupertino – a local anti-growth group – that require the council to either rescind the ordinances approving that ‘Specific Plan’ or put the questions on the ballot for voters to decide.

Under the ‘Specific Plan,’ Sand Hill Property Company, the owner and developer of Vallco, negotiated a development agreement with the city that included funds for a new City Hall – itself the topic of a lengthy discussion at last week’s council meeting, traffic mitigation efforts, and significant financial support for local schools.

After Better Cupertino announced plans to move forward with referenda to undermine the ‘Specific Plan’ approach, Sand Hill took its redevelopment through an SB 35 process.

The redevelopment of Vallco Town Center was subsequently approved by the City of Cupertino under SB 35 and is slated to include more than 2,400 total residential units with 1,202 at affordable levels.