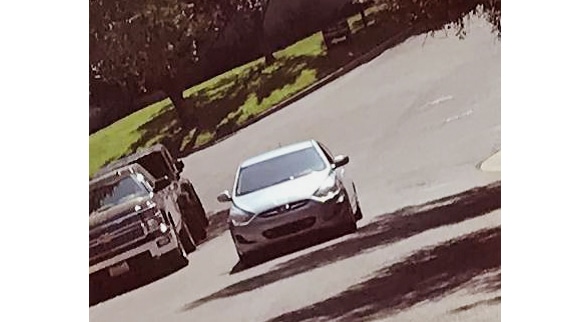 The sheriff's office believe this is the vehicle the suspects were using while stealing purses at stores in Cupertino and Saratoga on Aug. 19.

Authorities were investigating two purse-snatch robberies earlier this month, including one in Cupertino, and released an image of the suspect’s vehicle.

The incidents unfolded Sunday, Aug. 19, starting about 2:40 p.m., when a vehicle stopped in the 99 Ranch Market shopping center at 10425 S. De Anza Blvd. in Cupertino, according to the Santa Clara County Sheriff’s Office.

A female exited the vehicle and approached the victim and grabbed a purse which was resting on a victim’s shopping cart. The suspect ran back to the awaiting vehicle and fled the area, sheriff’s officials said.

About 30 minutes later, this same vehicle stopped in the Safeway Shopping center located at 12876 Saratoga Sunnyvale Road in Saratoga. This time, a man approached the victim and forcefully snatched the purse before fleeing in the vehicle.

Detectives were encouraging anyone who may have seen these incidents or have information to contact Detective Bui at (408) 868-6630.

Be the first to comment on "Purse snatchers sought in incidents in Cupertino, Saratoga"