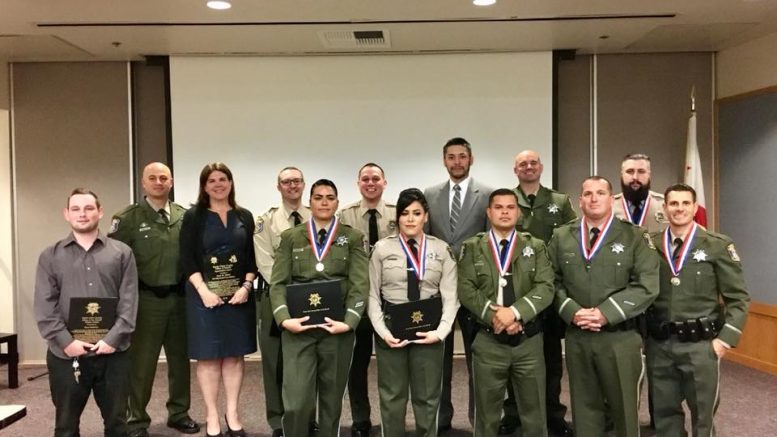 The Santa Clara County Office of the Sheriff released its regular list of significant police reports in Cupertino during the month of June, including a police pursuit involving a convicted felon found in possession of a sawed-off shotgun, and the window-smash burglary of pricey racing bikes from Cupertino Bike Shop on S. Foothill Boulevard.

June 24, Interstate 280 and N. De Anza Boulevard
At 3:29 a.m., deputies attempted to stop a motorist at Interstate 280 and N. De Anza Boulevard for traffic violations, but the suspect driver recklessly evaded until taking a turn too fast and driving the vehicle over the center island in the roadway, disabling the vehicle. The suspect exited the vehicle before it could come to a stop and fled on foot, but was apprehended a short distance away. The suspect was found to be a convicted felon and was in possession of methamphetamine for sales, a loaded sawed-off shotgun, which was previously stolen before being modified, a set of shaved keys and a Methamphetamine pipe. The suspect was arrested and booked into Main Jail.

June 22, S. Foothill Boulevard
At 4:37 a.m., a thief or thieves used a hammer to break the storefront glass window and stole three racing bikes totaling a loss of about $15,600.

June 21, Rainbow Drive: At 1:41 a.m., deputies responded to an in-progress burglary call in the 7400 block of Rainbow Drive, where the suspect broke into a storage unit at an apartment complex and took several pairs of boots, folding chairs and miscellaneous paperwork before taking off in a vehicle later determined to be stolen from Sunnyvale. Deputies caught up to the suspect fleeing the scene and the suspect recklessly evaded until eventually giving up. Further investigation revealed the suspect was in possession of the stolen property in addition to a shaved key and wire cutters. The suspect was arrested and booked into Main Jail.

June 21, N. Wolfe Road
Between 12:50-3 p.m., the windows of two vehicles parked near Benihana restaurant at Vallco Mall on N. Wolfe Road led to the loss of a backpack, clothing, debit card, driver’s license, school book and supplies, and a wallet. Total loss  was about $146.

June 21, Stevens Creek Boulevard at Saich Way
At 3:43 p.m., deputies made contact with the occupants of a suspicious vehicle parked at Target. An occupant who was on probation was found to be under the influence of a controlled substance, in addition to being in possession of a Methamphetamine pipe and a debit card not belonging to the suspect. The suspect was arrested and booked into Main Jail.

June 19, Homestead Road
At 5:21 p.m., deputies made contact with the occupants of a suspicious vehicle in the Homestead Square shopping center and found an occupant, who was on probation, in possession of a debit card, driver’s license and mail not belonging to the suspect, who was arrested and booked into Main Jail.

June 18, N. De Anza Boulevard
Between 8:45 p.m. and 10:40 p.m. on 6/18, unknown suspect(s) broke through the windows of three vehicles parked at BJ’s Restaurant and Brewhouse on N. De Anza Boulevard and took a backpack containing a laptop from one of the vehicles for a total loss of about $4,100.

June 17, Judy Avenue
Between noon and 2:30 p.m., three storage sheds at a residential construction site in the 10000 block of Judy Avenue were burglarized, with assorted tools and a snowboard stolen for a total loss of about $1,650.

June 14, 10000 block of Phar Lap Drive: Detectives conducted a probation compliance check at a residence and found the suspect illegally possessing gun powder, empty shell casings, a rifle bump stock and drug paraphernalia, in violation of the suspect’s probation. The suspect was arrested and booked into Main Jail.

Be the first to comment on "June police blotter: Window smashed at bike shop, leading to $15,600 in losses"