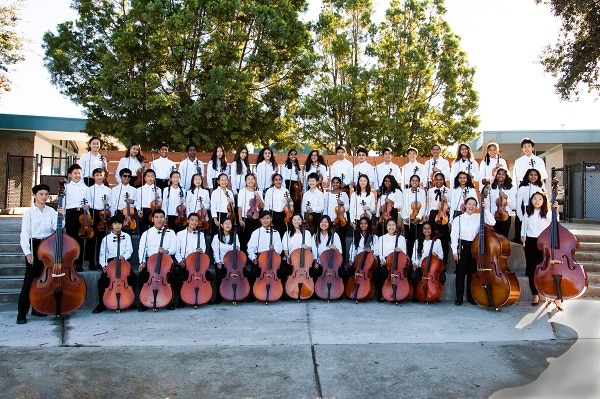 The Philharmonic Strings at Kennedy Middle School have been accepted to perform as a featured honor group at the California All-State Music Education Conference (CASMEC) on February 16 at the San Jose Fairmont and Convention Center. The Kennedy MS Philharmonic Strings are one of very few middle schools accepted to perform, and are the only orchestra performing at the convention among many high school and university ensembles.

CASMEC is an annual collaborative convention that is dedicated to connecting music students, teachers, professional ensembles and other music education organizations throughout California. The conference features bands, choirs, jazz bands and orchestras from the collegiate level to junior high.

The Kennedy Middle School Orchestra currently has 49 students who play string only instruments such as the violin, viola, cello, and double bass. The Philharmonic Strings will be playing 9 pieces at the convention, with 2 guest conductors and one guest viola soloist.

Johnathan Hsu, Director of Orchestras at John F. Kennedy, said that performing at CASMEC this year is a major achievement for the Philharmonic Strings, as the music department has struggled for the last few years. He is proud of how far they have come and said “students have worked passed that and now are one of the top junior high orchestras in the entire State of CA.”