A 4.4 magnitude earthquake in the East Bay at 2:39 a.m. this morning wasn’t the only temblor to shake the region.

Just under an hour later, a 2.6 magnitude earthquake struck 3 kilometers from Cupertino, according to the U.S. Geological Survey.

The quake activity prompted a flurry of social media chatter, particularly in response to the 4.4 quake that struck near Berkeley.

According to the San Francisco Chronicle, “People were awakened from the North Bay to San Jose, and some reported feeling it from as far as Sacramento and Lodi, but there were no immediate reports of damage or injuries.” 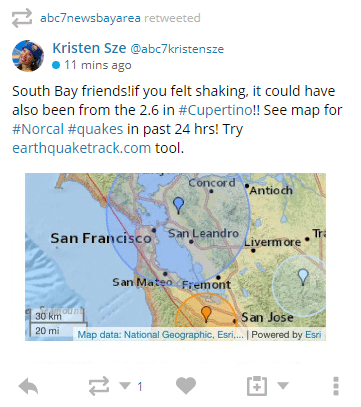