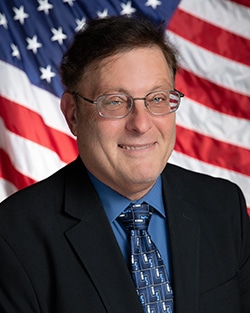 Cupertino Mayor Steven Scharf was just a few minutes away from wrapping up a panel discussion in San Francisco this week when he was asked a particularly thorny set of questions.

Near the end of the panel, an attendee asked Scharf about his recent comments about building a wall around Cupertino, and about Planning Commission Chair R Wang’s recent behavior on NextDoor.

“You’ve raised some eyebrows from other local leaders in the south bay for comments that you made about building a wall around Cupertino and then having San Jose pay for it,” the questioner asked.

She continued, “And recently the planning commissioner also wrote some comments on NextDoor, I believe he said ‘save the suburbs from an onslaught of anarchists and YIMBY neoliberal fascists.’ How are you ensuring that you and other leaders in Cupertino are serious about solving one of the region’s most critical issues?”

Scharf replied that his comments about the wall had been made in jest and that he believed Wang’s comments were “totally inappropriate.” He continued, “I know he has apologized…maybe it’s not enough. I think he knows to behave better in the future, and his choice of words was very bad.”

Misstatements about affordable housing at Vallco

During the robust discussion about housing supply and the growing inequity in communities across the Bay Area, Mayor Scharf claimed “we don’t get the housing we need and we don’t get the BMR [below market rate] units that go along with it.”

It was an odd statement for Scharf, who has been a vocal opponent of the proposed Vallco Town Center redevelopment in Cupertino, which includes 2402 total units – half of which are slated to be below market rate.

Later in the event, panel moderator Ron Brownstein pressed Scharf about Cupertino’s housing policies, which led to some misstatements from Mayor Scharf.

“We have one developer who wants to build 2900 units of housing and will have zero BMR units and clearly the community and the council was not on board with that,” Scharf said.

That was seemingly an inaccurate reference to the Vallco Specific Plan, which the city recently killed. That plan had set aside 20% of its units – 534 units in fact – not the zero units that Mayor Scharf claimed.

Scharf continued, “And now they’ve changed ‘well we’re gonna do SB 35 but all of our BMR units are going to be studios and 1 bedroom with nothing for families.’”

The SB 35 version of the Vallco redevelopment, which started demolition last fall, is set to feature 2,402 units of housing, including 50% at below the market rate bringing 1,201 affordable units to the city. 1,201 units that would help plug the significant affordable unit hole that Cupertino finds itself in.

Be the first to comment on "Cupertino Mayor responds to housing criticisms, Planning Commissioner’s behavior"