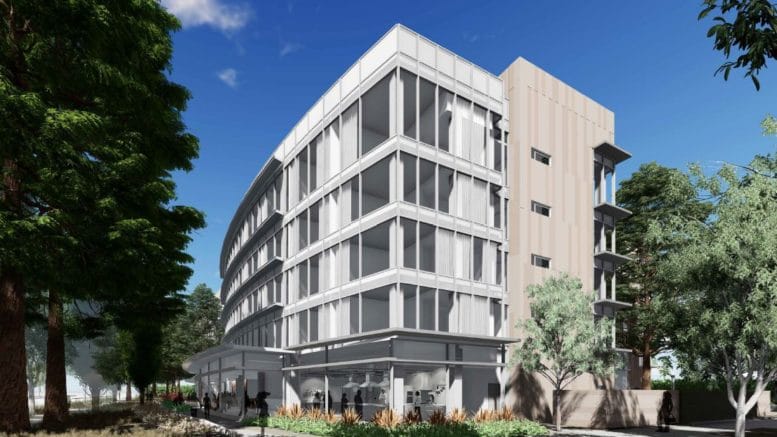 Rendering of the hotel, from Kimco Realty proposal on Cupertino City website.

A new 185-room hotel project in Cupertino is moving forward after a public hearing and City Council review earlier this week.

The hotel, set for the 10801 and 10805 North Wolfe Rd. lots across from Apple Park in the northeast part of the city, will be five stories and feature two levels of underground parking with approximately 200 total spaces. Two existing commercial buildings at the site need to be demolished to make way for the new structure.

Cupertino’s City Council discussed the project at length during its meeting Tuesday night. Several residents and councilmembers raised concerns about the environmental sustainability of the project, particularly its potential LEED rating. The council eventually approved the project on a unanimous vote.

There was also conversation about parking, and how the hotel and neighboring Cupertino Village shopping center will interact at peak times for each facility.

Plans for the hotel, available for review in more detail on the city’s website here, include event meeting rooms, an on-site restaurant, and a rooftop bar. According to testimony at the council meeting, the hotel is expected to employ between 40 and 50 employees once open.

What hotel brand will eventually operate the hotel has not yet been determined. Construction, once started, is expected to take approximately two years to complete.