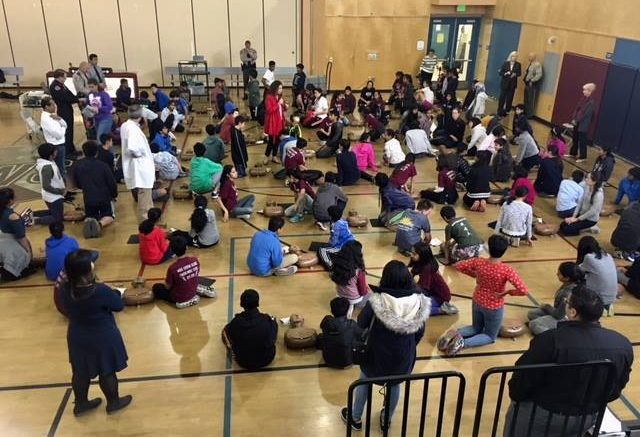 About 100 Cupertino middle school students now have the power to save lives after learning how to operate an automated external defibrillator (AED).

That skill will be helpful, as defibrillators are expected to be installed in every public school in Santa Clara County by June next year, according to County Supervisor Mike Wasserman. And not just in schools — this is part of a $1 million investment by the county in partnership with the Palo Alto nonprofit Racing Hearts to have 660 AEDs installed in 553 “high-risk” locations across the county.

On Tuesday, Racing Hearts visited Lawson Middle School at 10401 Vista Drive to present in the gymnasium about AEDs, which deliver an electric shock to the chest of a person suffering from cardiac arrest or an irregular heartbeat.

The event was attended by county Supervisors Cindy Chavez and Wasserman as well as California state Sen. Jerry Hill. Before practicing using an AED on a dummy, the students were led by Chavez in a pledge to save lives.

The event raised awareness about the county’s partnership with Racing Hearts to place and install defibrillators in high-risk community locations, including public schools.

The county would be the first in the state to have defibrillators in every school, Wasserman said.

Kathleen Hua, 13, said she now feels empowered to make a difference in a life-saving situation.

“If I hadn’t done this activity before, and if somebody collapsed and I had to help them, I would probably endanger their life more than help them,” she said.

Funding for the investment in AEDs were approved by the county board in June of 2015, following a recommendation by Supervisor Chavez to allocate Measure A and EMS Trust Fund resources to establish a $500,000 matching fund. Additionally, Supervisors Joe Simitian and Chavez requested that the Fiscal Year 2018 budget include $500,000 for AEDs from EMS Trust Funds.