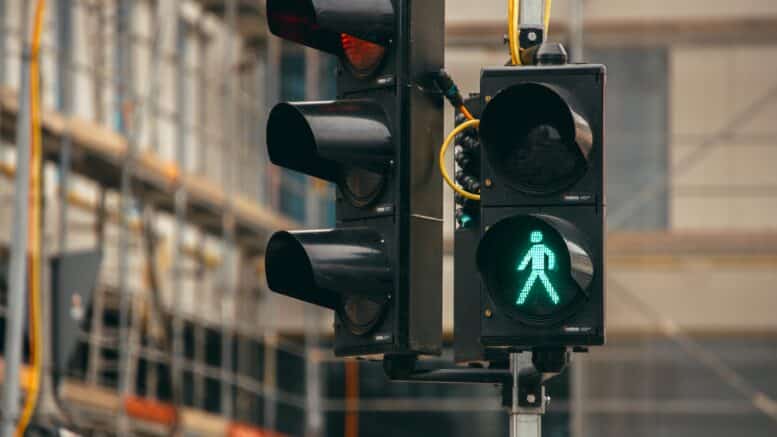 The City of Cupertino is implementing its first ‘pedestrian scramble’ at the intersection of Bubb and McClellan roads beginning Monday, Jan. 23. The concept refers to a phased approach to pedestrian and car traffic light signaling designed to improve safety and reduce congestion.

According to the City’s Bicycle Pedestrian Commission, the Bubb-McClellan intersection experiences significant congestion. Right-turning cars are unable to turn on green lights due to crossing pedestrians in all directions. At the same time, trailing cars are unable to pass because it’s a single lane. As a result, as few as two cars are able to proceed during each green light.

In other words, during the WALK or ‘scramble’ phase, pedestrians can cross up to two legs of the intersection (but not diagonally). Cars can no longer turn right on red during this phase.

During the DRIVE phase, cars can turn right freely, and pedestrians will not be allowed to cross. The City’s new plan also includes the implementation of protected left turns in all directions.

If your brain is still feeling ‘scrambled’ about how the ‘scramble’ works, the City created a video explanation, which can be found here. Questions or feedback can be submitted to the Cupertino Safe Routes to School team at saferoutes@cupertino.org.

Several large California cities, including Oakland, San Francisco, and Los Angeles have installed ‘pedestrian scrambles’ at high-traffic intersections, with impressive results. At the intersection of the iconic Hollywood and Highland in L.A., for example, the city has seen more than a 50% reduction in vehicle-pedestrian collisions since the ‘pedestrian scramble’ was installed in 2015, according to the Los Angeles Department of Transportation.