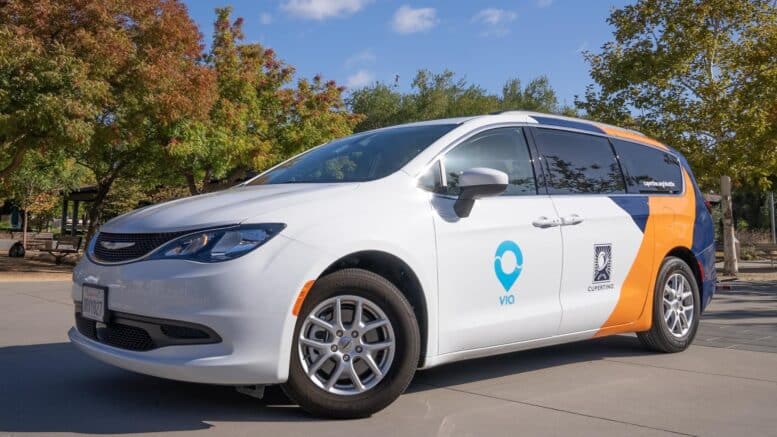 Photo courtesy of the City of Cupertino

After a successful three-year pilot program, the City of Cupertino’s on-demand shuttle service Via-Cupertino is receiving state grant funding to expand into other South Bay cities and transition its fleet to electric vehicles.

The $8.5 million grant from the California State Transportation Authority funds Via-Cupertino’s operations for another five years and allows the purchase of seven more vans. The program will be introduced to areas like Sunnyvale and San Jose beginning in April 2023.

The City is taking name suggestions for “Via-Cuper-Clara” (a placeholder name) through a student art and naming contest. The winner’s art will be featured as the new design for the shuttle vehicles.

The City encourages high school students to submit their designs and name proposals under the guiding themes of community, transit/mobility, and ease of use before Sunday, February 26, 2023. Winners will be announced in March 2023. Contest details can be found here.

According to the City, popular Via-Cupertino destinations include the Sunnyvale Caltrain Station, Apple Park, and Kaiser Permanente Hospital. More transit hubs like the Santa Clara and Mountain View Caltrain Stations are expected to be added to the shuttle route next year.

Currently, the one-way shuttle fare is $3.50 with a discounted fare of $1.75 for Seniors, students, as well as low-income and disabled residents.

To learn more about the Via-Cupertino shuttle service and expansion plans, visit the City of Cupertino’s website.