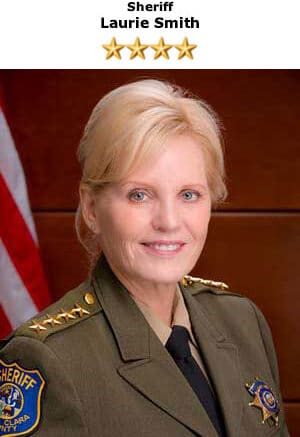 This article was updated to reflect the Civil Grand Jury verdict issued November 3, 2022.

Santa Clara County Sheriff Laurie Smith was found guilty today by a Santa Clara County Civil Grand Jury on six counts of corruption and misconduct as part of a pay-to-play civil corruption trial following her 2021 indictment. Smith served as County Sheriff for 24 years and previously stated she would retire at the end of her term in January 2023 with no plans to seek reelection.

After six days of deliberations, a jury found her guilty of all six charges. Smith’s attorney had moved to have the case thrown out on Monday afternoon, however the verdict was returned before this could happen.

In a press release issued by the Santa Clara County Sheriff’s office, Acting Sheriff Ken Binder stated that “the actions of a few people are not a reflection of the great work that our deputies do every day. The men and women of the Sheriff’s Office are looking forward to new beginnings, with the Sheriff election coming up next week.”

Undersheriff Ken Binder has assumed the role of Acting Sheriff until a new Sheriff is elected on November 8. Voters will choose between former Palo Alto Police Chief Robert Jonsen and former County Sheriff Capitan Kevin Jensen in next week’s election.

The guilty verdict means Smith will be removed from office and banned from running for public office in the future. She could also face criminal charges relating to the same accusations. Smith had denied all claims of wrongdoing. Smith had previously announced this week that she was retiring effective Monday, October 31.

The corruption trial follows a vote of no-confidence by the Santa Clara County Board of Supervisors last year. The Board declared County Sheriff Laurie Smith could not be trusted to “faithfully, effectively and ethically perform the duties of the role.” Mayor Sam Liccardo also joined several Supervisors in calling for the resignation of Sheriff Smith over the same allegations last summer.