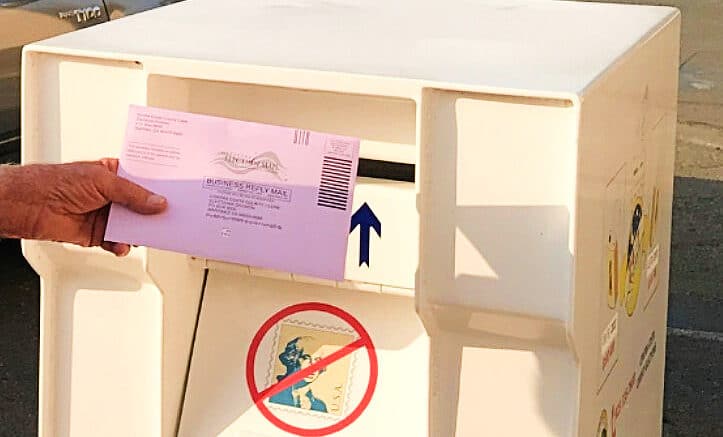 The November 8 election is quickly approaching and local politicians across the spectrum are faced with complex issues like public safety, the housing crisis, and a declining economy.

Check out who will be on your ballot this month in the City of Los Altos.

This year’s City Council race has not lacked excitement. With three candidates competing to fill two open seats, tension has been high and hit pieces aplenty. At the center of the race is a public conflict between incumbent Anita Enander and newcomer Pete Dailey. In numerous instances, Dailey has openly accused Enander of lying about the true intentions of her campaign and values. In response Enander added a disclaimer to her campaign website that links to a video of her “setting the record straight”.

Santa Clara valley native Anita Enander has served on the Los Altos City Council for four years, currently sitting as Mayor, and is seeking reelection in November. She previously sat on the Planning Commission, the Downtown Building Committee, and the Silicon Valley International School Board.

Throughout her term, Enander has prioritized resident-centered leadership, data-based policy making, and fiscal responsibility. If reelected, Enander plans to continue to make fiscal discipline a focal point, hone in on public safety and infrastructure maintenance, as well as improve City operations and protect business districts and neighborhoods.

Enander’s campaign website claims that she is not influenced by special interests and is not seeking endorsements or donations from organizations, officials, or political action committees. However, she does publicly list various supporters, including former Planning Commissioner Jon Baer and former Los Altos Mayor Lou Becker.

Despite Enander’s stance on endorsements and donors, Pete Dailey has accused Enander of being endorsed by the Silicon Valley Association of Republican Women. Enander claims she has no connection to the group. A SVARW representative told the Los Altos Town Crier that the group makes endorsements regardless of a candidate’s permission or participation.

Controversy has also surrounded mailers that appear to endorse Enander, but were paid for by her campaign. Enander told the Town Crier that the flyers were “flat-out advertisements”, not endorsements.

Neysa Fligor is a current Los Altos City Councilmember and former Mayor seeking reelection. During her time on the council, Fligor says she has helped increase COVID-19 vaccination rates, supported the Climate Action and Adaptation Plan, and maintained strong financial reserves. If reelected, Fligor’s primary goal will be to ensure Los Altos remains a great place to live, work, and retire. Steps towards meeting this goal would include promoting fiscal responsibility, protecting open space, investing in infrastructure, addressing the housing crisis, improving public safety, and maintaining the character of the town.

Pete Dailey is the only new name in this season’s council elections. Dailey retired from the tech industry in 2014. He is a member and former chair of the Los Altos Parks and Recreation Commission, an Executive Board member at the Silicon Valley Democratic Club, and the Chair of the Board of Directors for the Lassen Park Foundation.

If elected, Dailey intends to increase housing and affordable housing in Los Altos while remaining mindful of environmental impacts and City finances. He also plans to take a different approach towards prioritizing fiscal responsibility, noting discrepancies between councilmembers’ campaign promises and their voting records in the past.

Dailey has been vocal about his disapproval of the current council in recent weeks. In a September debate, Dailey was critical of the council, accusing members of micromanagement and highlighting that former finance director John Furtado attributed his leaving to council overreach that interfered with his job.

His endorsements include various former Mayors and community groups like Santa Clara County Democratic Party and Los Altos for Racial Equity. His full endorsement list can be found here.

Five newcomers and one incumbent are competing for just three seats this election season. This year, the Board will be tasked with designating the $295 million Measure E bond and overseeing the completion of various construction projects.

Catherine Vonnegut is the only incumbent seeking reelection. Vonnegut currently sits as Board President and a member of the Finance Committee. In her first term, Vonnegut aided in transitioning the district to virtual learning, and later helped implement a safe COVID testing and tracking system when students returned to campus.

Vonnegut’s campaign website states she hopes to engage the community with equity and inclusion, and deliver excellent education while also supporting the wellness of students, staff, and families. Her endorsements include the Los Altos Women’s Caucus, MVLA District Teachers’ Association, and the Los Altos Town Crier. Her full endorsement list can be found here.

Eric Mark is a retired engineer, father of three and political newbie. Raising his children in the local school system led him to discover holes in district priorities, inspiring him to run for a seat. Students’ mental health and post-grad preparedness are his top concerns.

Mark’s platform runs on the idea that education is more than just academics, and believes class offerings should be inclusive of all of the talents and needs of the diverse student body. This includes supporting kids of different backgrounds, proactively addressing mental health issues, and implementing an ethnic studies curriculum, all with an end goal of helping students develop real world skills.

Mark’s endorsements include various stakeholders, ranging from MVLA Board Members to Stop AAPI Hate. His full endorsement list can be found here.

Esmeralda Ortiz is a first-generation college graduate and a longtime employee for the Boys & Girls Clubs of the Peninsula, currently serving as the Vice President of its high school and post-secondary success program. She began her career working for her alma mater, UC Berkeley, in their Office of Undergraduate Admissions.

Her campaign goals include increasing awareness and access to resources necessary to pursue diverse postsecondary pathways; addressing the social, emotional, and mental well-being of every student; and forming deeper community ties to support students in their transition from middle to high school. Ortiz believes her professional background paired with being married to a MVLA school teacher qualifies her to successfully sit on the board.

Among Ortiz’s endorsements are the Santa Clara County Democratic Party, the Talon, and the Los Altos Women’s Caucus. Her full endorsement list can be found here.

Carrol Titus-Zambre is business owner and mother to 3 MVLA students. She is a veteran of the Silicon Valley tech industry, and was a sports coach at Los Altos High and the National Youth Volleyball Association. She was also a local Girl Scout troop leader.

Carrol Titus-Zambre said she was inspired to throw her hat in the ring for a school board seat after meeting Superintendent Nellie Meyer through a mutual friend. She stated Superintendent Meyer “tapped her to run” and falsely claimed in an email to the Town Crier that the Superintendent had endorsed her. Titus-Zambre has since withdrawn her comments, attributing the misunderstanding to her limited knowledge of political language.

Titus-Zambre’s controversial quotes on COVID-10 and school closures in an article from the Talon (Los Altos High School’s student newspaper) have also followed her through her campaign.

Thida Cornes, while a newcomer in the board race, is not new to local politics. Cornes advocated on the Parks and Recreation Commission, served as Vice Chairperson of Mountain View’s Environmental Sustainability Task Force, and been a member on various Mountain View Whisman School District committees, in addition to sitting on the PTA and School Site Council.

As a disabled Anglo-Burmese immigrant and MVLA mother, Cornes believes she can offer first-hand knowledge that will help to adapt educational experiences to every student, regardless of their background. Cornes’ goals include improving student mental health and wellness, promoting academic achievement for all students regardless of circumstance, and ensuring fiscal responsibility and transparency. She hopes to achieve these goals through steps such as reducing class sizes and advancing the ethnic studies program from the pilot phase into a requirement.

Jacquie Tanner is a longtime Mountain View resident, MVLA mother and retired tech executive. Tanner recently decided to swap her role at Tesla for the chance to dedicate herself to serving the community. She stated that she strongly believes parent voices are vital on the board.

If elected, Tanner plans to help grow enrollment, improve the transition from 8th grade into high school, address the mental health crisis, and encourage fiscal responsibility and transparency. As a graduate of Mountain View’s public school system and former Senior Production Materials Planner, Tanner hopes to use her personal experiences and learned skills to bring a fresh and independent perspective to the board.

Four candidates are in the running to fill three open seats on the LASD Board of Trustees. Three of the four are seeking reelection. LASD has recently faced challenges ranging from declining enrollment to questions over the use of the districts’ 10th school site purchased in 2019.

Vaishali Sirkay is running for reelection after having a positive and rewarding experience during her first term. Sirkay ran in 2018 with the goal of introducing a holistic approach to education. She later sat as Board President in 2021.

Sirkay’s campaign this season remains centered on holistic education, focusing on the mental health and wellness of students and staff in addition to their education. In her second term, she hopes to use a holistic approach to address learning loss caused by the pandemic on both an academic level and a social-emotional one.

Vladimir Ivanovic was elected to the board in 2014 and is seeking reelection this term. In addition to serving on the LASD Board of Trustees, Ivanovic is currently working towards a doctorate degree in educational leadership. He previously acted as chairperson for the Citizens’ Advisory Committee for Finance for eight years, during which he reviewed LASD finances regularly.

If elected, Ivanovic’s primary goal is to help the district maintain academic excellence and ensure students are supported in way that prepares them for college and beyond.

Bryan Johnson previously acted as Board President in 2020, and been a member of the board for the last six years. During this time, he has prioritized the physical, mental, and emotional health of students and staff, and encouraged open communication and transparency between the district and the community. Most notably, Johnson helped develop the plan to create a new campus and later helped the district pivot to remote learning during the pandemic.

If reelected for a third term, Johnson intends to continue to support students, teachers, staff and families. His goals also include investing in school facilities and helping combat the housing crisis so teachers and staff can continue to afford to live in the community.

Newcomer Dr. Sara Farr decided to join the race for Board of Trustees after she struggled to work with the district to address concerns about her child’s wellbeing and safety. Farr hopes to tackle and treat mental health issues among students and the inequity in education between private and public schools.

Farr is a mother of two and an internal medicine physician at El Camino Hospital. She helped lead the fight against COVID-19 in Santa Clara County in the early days of the pandemic, being one of only three doctors who volunteered to care for COVID-19 patients at the hospital where she was working at the time.

For more information on the November election, visit the City of Los Altos’ website.