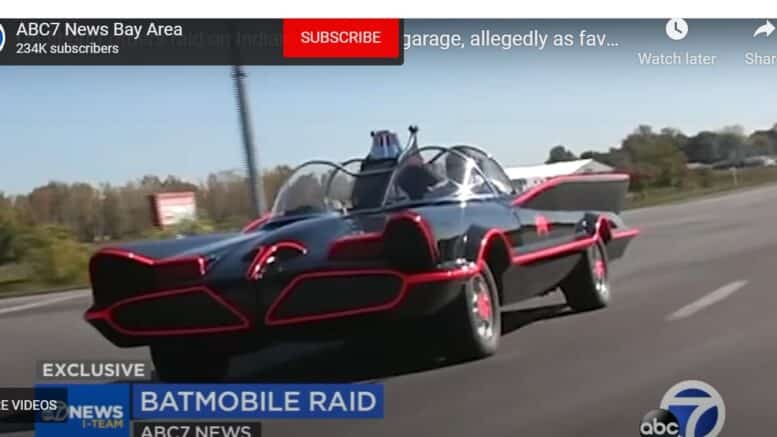 San Mateo County Sheriff Carlos Bolanos was the subject of an ABC 7 report this past weekend highlighting how he sent a lieutenant, sergeant, and two deputies to Indiana to raid a car shop making a specialized 1960s Batmobile look-alike for his friend. The sheriff’s department paid for four round-trip plane tickets, three nights of hotel accommodations, and several hours of overtime, all to raid the garage making the Adam West Batman-era automobile and arrest its owner.

Real-estate developer and Atherton resident Sam Anagnostou ordered the car from maker Fiberglass Freaks of Logansport, Indiana, for a reported cost of $210,000. According to the business’s owner, Mark Racop, Anagnostou failed to make a $20,000 payment and went silent for nearly nine months. When the real estate developer finally did get back in touch to pay his entire bill, Racop had moved him to the bottom of the delivery list for the car, delaying Anagnostou’s fun for another year and a half to two years.

Anagnostou was unhappy about waiting additional time for his car and filed a criminal complaint with the Atherton Police Department. When the San Mateo County District Attorney decided not to file charges, Anagnostou filed a lawsuit in San Mateo County. A judge dismissed that lawsuit, saying that Indiana was the proper jurisdiction for the case.

The real estate developer then got Bolanos, a Facebook friend, involved.

Sheriff’s officers flew to Indiana, used a valid warrant to raid Fiberglass Freaks, collected two files of documents on the car build, arrested Racop, and held him in jail for one hour. After his release, Racop learned that officers had frozen his bank account and attained a warrant to search his Gmail, contacts, and photos. They had also charged him in California with two felonies — Obtaining Money by False Pretenses and Diversion of Construction Funds.

The San Mateo District Attorney’s Office told ABC 7 that new evidence had come to light that instigated the raid. Still, a former prosecutor the news station interviewed was flabbergasted by the situation and said the dispute belonged in Indiana civil court.

Bolanos is on a month-long vacation right now. He recently lost a reelection bid in June and will leave office in January. Anagnostou is also on vacation but, through his lawyer, told ABC 7 he’d be willing to be interviewed about the situation when he returned.