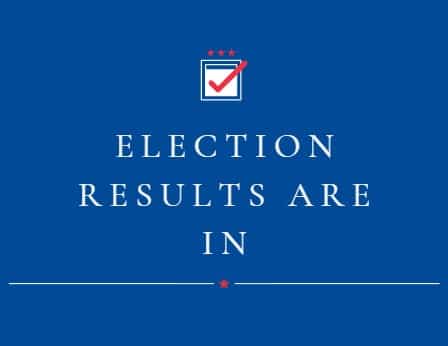 While electioneers have not counted all the ballots for the June 7 primary in San Mateo and Santa Clara counties, there were some clear results in contested races.

Below are the latest results from the first vote count. Please note that only half of all ballots have been officially counted, but most of these races have been called.

Santa Clara County Board of Education Trustee Rosemary Kamei will not likely have to face any challenger in the November election. She garnered 64 percent of the vote in the first vote count, well past her nearest challenger Ramona Arellano Snyder, who got 26 percent. Anyone who gets past 50 percent in the primary is considered the overall race’s winner and won’t have to run again in November.

In November, Omar Torres, a Trustee for the San José-Evergreen Community College District Board of Education, will likely face Irene Smith, a multi-careered lawyer, business owner, and mental health care professional. Torres received roughly 40 percent of the vote at first count, while Smith had 20 percent.

Former Councilwoman Nora Campos will most certainly be advancing to November, having received roughly 32 percent of the vote. However, her opponent isn’t yet clear. Santa Clara County Board of Education Member Peter Ortiz leads District 4 Senior Council Assistant HG Nguyen by less than 200 votes at the last count.

Authorizing an amendment to the Santa Clara Valley Water District Ordinance, limiting district Board members to no more than 4 consecutive terms and establishing 4-year term limits.

Shall the City Charter be amended to elect city council members by district, excepting the mayor, to establish six districts for the election of one council member to represent each district; and to establish a 30-day residency requirement for all elected officials?

Authorizing the Fremont Union High School District to issue up to $275 million in bonds, requiring an estimated property tax levy of $0.015 per $100 in assessed value.

For updates on the latest election results, check https://results.enr.clarityelections.com/CA/Santa_Clara/113941/web.285569/#/summary. Updates are usually posted at 5 p.m. each day.

Assemblymember Kevin Mullin received roughly 41 percent of the vote of the first count, while San Mateo County Supervisor DJ Canepa came in second with approximately 23 percent. The two will face each other in November.

Board of Supervisors District 2 – Stone vs. Corzo

Belmont City Councilmember Charles Stone and San Mateo-Foster City School District Trustee Noelia Corzo will run against each other in November. The two finished a fraction apart in the first count, with Stone receiving 44 percent and Corzo receiving 43 percent of the vote.

Board of Supervisors District 3 – Mueller vs. Parmer-Lohan

Former Millbrae Chief of Police Christina Corpus appears to have defeated incumbent Sheriff Carlos Bolanos. Corpus received nearly 55 percent of the first vote count, compared to Bolanos’ 45 percent. If a candidate exceeds the 50 percent vote threshold, they do not have to run again in November and are declared the official winner of the race.

Renewing for 10 years an existing annual parcel tax of $292 per parcel, thereby generating an estimated $3.5 million per year for local elementary school funding.

Renewing for 6 years an existing annual parcel tax of $131 per parcel, with the exemption of seniors, thereby generating an estimated $450,000 per year for local elementary school funding.

Authorizing the Hillsborough City School District to issue up to $140 million in bonds and requiring an estimated property tax levy of $30 per $100,000 in assessed value.

Authorizing the Jefferson Elementary School District to issue up to $45 million in bonds and requiring an estimated property tax levy of $15.70 per $100,000 in assessed value.

Authorizing the Millbrae Elementary School District to issue up to $90 million in bonds and requiring an estimated property tax levy of $30 per $100,000 in assessed value.

Authorizing the Ravenswood City School District to issue up to $110 million in bonds and requiring an estimated property tax levy of $30 per $100,000 in assessed value.

The next election update will be on June 9 at 4:30 p.m. Find the latest results at https://www.livevoterturnout.com/ENR/sanmateocaenr/10/en/Index_10.html