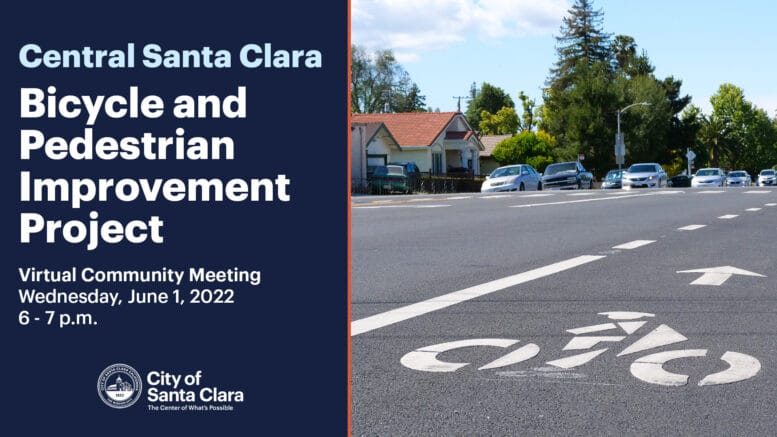 Santa Clara will hold a virtual community meeting on June 1 from 6 to 7 p.m. to hear about potential bicycle and intersection improvements near the Civic Center on Scott Boulevard, Warburton Avenue, Monroe Street, Lincoln Street, and Lafayette Street.

Santa Clara approved an ambitious Bicycle Master Plan in 2019 that lays out plans to expand the city’s bicycle-friendly pathways from 70 miles to 142 miles and raise the number of people commuting by bike from 1.8 percent of the population to 5 percent by 2026.

Design bicycle facilities that are accessible and

comfortable for people of all ages and abilities.

Identify, develop, and maintain a complete and

Increase bicycling as a comfortable and convenient

and initiatives that encourage and celebrate a

city’s progress in achieving its vision.

Santa Clara prioritizes 40 areas in the city it wants to make more bicycle-friendly. The city hopes to complete improvement projects for the top 10 of those areas by 2026. The improvement of Scott Boulevard from Monroe Street to Saratoga Avenue is ranked third on the top 10 list, while the fix for Lincoln Street between Warburton Avenue and Homestead Road is ranked 10th. The rest of the projects under examination are scattered about the top 40.

Santa Clara expects to spend close to $40 million completing the projects laid out in the Bicycle Master Plan.