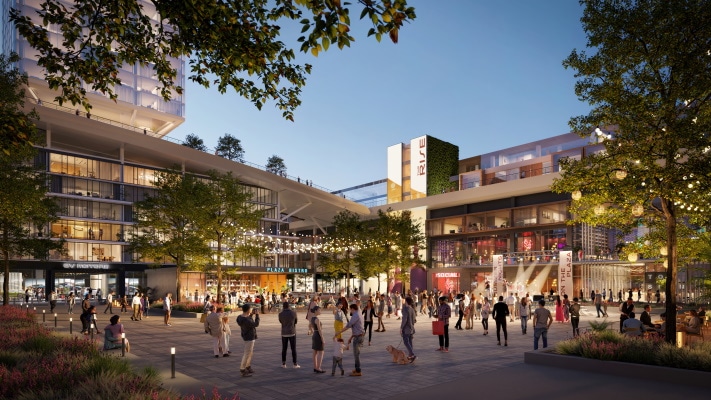 The 50-acre housing, office, retail, and parkland development currently under construction at the old Vallco Mall will now be known as The Rise. The Sand Hill Property Company, which oversees the mixed-use Cupertino site, announced the new name on Thursday when it launched the property’s new website, TheRiseCalifornia.com.

The rebranding pays homage to California’s spirit of possibility, history of innovation, and breathtaking natural beauty. The Rise’s managers hope the name will evoke the sense of positivity and vitality that Cupertino’s new downtown neighborhood will inspire in those who live, work, or visit the area– as a place where spirits and prospects will rise.

“Today is an important moment for those who have shared in Vallco’s journey to be able – at last – to visualize the experience we have created together with The Rise,” said Reed Moulds, managing director for Sand Hill Property Company. “The Rise is born from the global capital of innovation – Silicon Valley has changed the way the world lives, and The Rise aspires to fundamentally change how Silicon Valley lives.” The Sand Hill Property Company has been working with members of the Cupertino community for the last seven years to identify wishes, needs,

and priorities for the former mall site. The current iteration of the development includes popular elements from recent resident input cycles and is reflective of more than three years of refinement since the project’s legal approval, as well as feedback from a series of community surveys conducted over the past six months.

When complete, The Rise will include more than 2,400 homes, half of which will be affordable at varying below market rates, representing more than half of Cupertino’s housing planning obligation to the state for the next eight years. It will also include 1,973,000 square feet of office/lab space, with expanded floor plates to allow spacious office layouts and various laboratory configurations. The main arrival ramp down will move resident, worker, and visitor cars quickly off arterial streets and into a central concierge and rideshare hub or a broader tech-enabled below-grade parking area.

The property will not just be for its residents and office workers. The whole community will be able to take advantage of 429,000 square feet of retail, dining, and entertainment spaces arranged in districts that will form Cupertino’s new downtown. Center-court at The Rise will be the West Plaza, a highly programmable destination capable of hosting major events, community gatherings, farmers markets, cultural festivals, music performances, and seasonal offerings such as harvest parties and holiday ice-skating.

Outdoor enthusiasts will have access to a 29-acre green roof – the largest in the world – and over six miles of trails and bike paths. Overall, the Rise will have 40 acres of open space, including 4 miles of trails and paths, recreational lawns, family picnic areas, playgrounds, seating areas, and an informal amphitheater. It will also have a new open-air netted playfield over Wolfe Road that will serve as a bridge between all buildings of the 50-acre site.

“ I am thankful to and proud of my team and our partners in the community who have worked diligently together to ensure that this project will surpass the community’s expectations, not just today but into the future,” said Moulds. “These programming details were especially informed and inspired by the evolutionary changes over the past two years, and our continuing community outreach has helped ensure we remain connected and optimistic in our vision for our post-pandemic world.”

The Rise is one of the first projects approved under California’s SB 35 legislation. Signed into law in 2017, SB 35 streamlines the approvals process for projects that strictly adhere to all applicable objective standards (such as General Plan and zoning requirements) established by cities struggling to provide their fair share of housing.