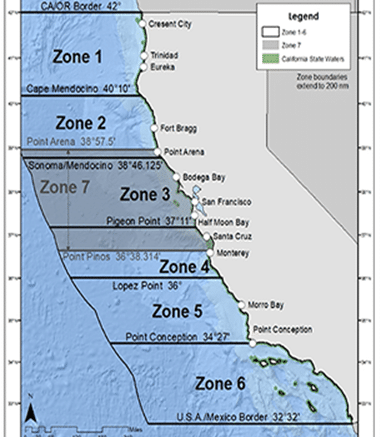 Dungeness crab season within Zone 3 — from the Sonoma/Mendonico county line to Pigeon Point just south of Half Moon Bay — will open for recreational crab trap fishing at 9 a.m. Friday, while commercial fishery within that zone can start at 12:01 a.m. Wednesday, Dec. 29, according to the California Department of Fish and Wildlife (CDFW).

Also, the commercial fishery 40-fathom depth restriction will also be lifted in Fishing Zone 4, an area that includes Santa Cruz and Monterey, beginning at 8:01 a.m. on Dec. 26.

Local crab fishing season has been delayed this year due to the presence of humpback whales and sea turtles, which can become entangled from trap gear. But CDFW determined that the continued decline of whales in zones 3 and 4 has lowered the risks of entanglements to the point that “it is time to provide fishing opportunity in all fishing zones.”

With feedback from port and crab owner associations within zone 3, a Dec. 29 start date was set, which provides time to prepare for the fishing season and also for remaining whales to leave the fishing grounds, according to CDFW.

In a statement, Oceana, an ocean advocacy organization, expressed support for the opening “so that markets and consumers from San Mateo to Sonoma County can have local, whale-safe crab available in time to ring in the New Year.”

Oceana says it has partnered with fisherman to test fishing gear that “would allow for fishermen to catch crab in areas that are otherwise closed to conventional crab traps.”

“Design of the pop up gear eliminates vertical rope sitting in the water column which is the source of entanglement risk for whales and sea turtles,” the organization said.