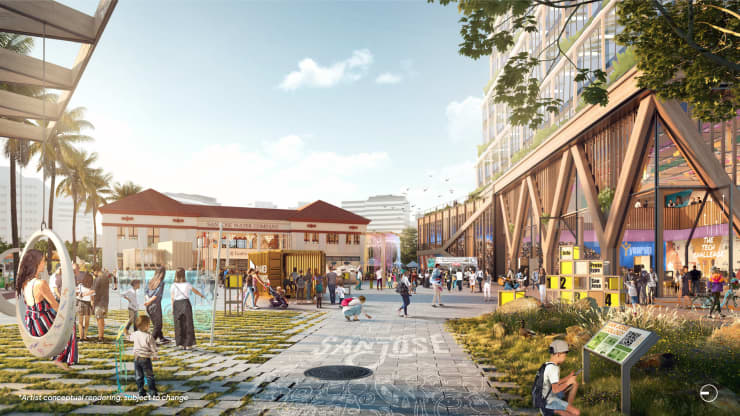 “Tonight, our council unanimously made a historic decision, one that will enable San Jose to lead the nation not merely in economic recovery from this pandemic, but in an equitable recovery,” said Mayor Sam Liccardo. “With tonight’s vote, Google will make the largest private sector investment in San Jose’s history–and just about any other city’s history–while also delivering more than $1 billion in public benefits, ranging from affordable housing to parks to job training and college scholarships.”

The Council’s approval followed the April 29 blessing from the San Jose Planning Commission. With yesterday’s vote, Google can now begin creating detailed designs of the buildings, parks and plazas they are envisioning for the future development.

As part of the approval, a last-minute settlement deal was reached between the city, Google and the San Jose Sharks, who previously had been vocal about their opposition to the project. The Sharks originally raised concerns about parking issues and unwanted traffic surrounding the SAP Center during construction, which could take up to 15 to 20 years.

Google and the city addressed these concerns by making several modifications to the project agreement, including ensuring that at least 2,850 parking spaces will remain within 1/3-mile of the south entrance of the SAP Center, and covering increased costs for the Sharks’ transportation and parking management programs. The city has also agreed to consult with the Sharks over the final design and capacity of the street network surrounding SAP Center to help mitigate traffic.

“We sincerely appreciate the efforts by the city and Google to address (Sharks Sports & Entertainment)’s concerns, and we look forward to continuing discussions as these projects move forward,” Sharks spokesperson Scott Emmert wrote in a statement Tuesday evening.