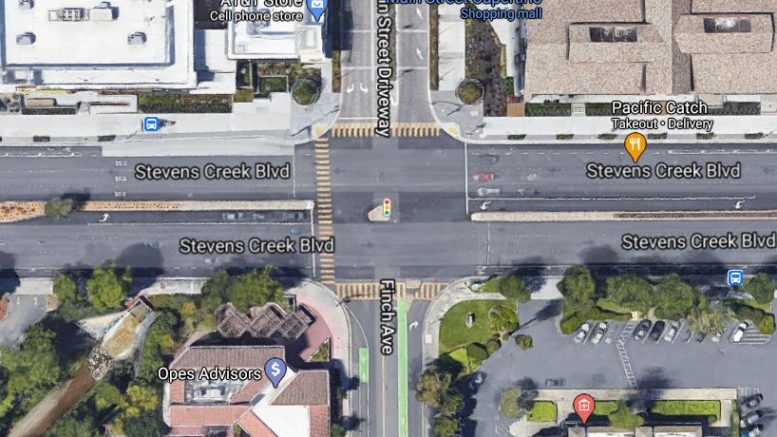 The location of the future rainbow crosswalk: Stevens Creek at Finch. Image from Google Maps.

After months of hearing from LGBTQ+ advocates, the Cupertino City Council approved a rainbow crosswalk, of sorts.

Four hours into its meeting on September 23, the council took up the discussion. Councilmembers offered a range of perspectives and ideas. While all advocated for supporting the LGBTQ+ community, council split on the right approach.

“I do think it is really important to the community, to me, that our community is seen as being all inclusive,” Councilmember Jon Willey said.

Several members of the public also made comments, mostly in support of a crosswalk.

“This crosswalk will act as a beacon of hope to many students attending [Cupertino High],” said Drew Lloyd. He serves as President of BAYMEC, a local LGBTQ-advocacy organization.

Pat Tietgens, also of BAYMEC, pushed for the crosswalk at a location on Stevens Creek Blvd.

“I strongly believe that a rainbow street crossing…would send a very positive message not just to broader society but especially to high school kids,” Tietgens said.

One city resident, identified only as Justin, noted the meaning of the proposed location near Cupertino High.

“[Students are] the people that we want to protect the most as they are the future of our city,” he said.

Not all on board with the crossing

The majority of the council comments and input from the public were supportive of a crosswalk in some form. Some discussion, however, did advocate for other efforts instead.

Resident Lisa Warren expressed concerns about the location and pushed for rainbow lighting, calling the crosswalk a “very narrowed-in idea.”

Councilmember Liang Chao proposed a rainbow bench or other kinds of symbols.

“We want people to feel that we welcome them and we appreciate their presence,” Chao said.

Eventually, Councilmembers Willey and Rod Sinks moved to have the city implement a rainbow stripe across Stevens Creek Blvd. It will connect Main Street Cupertino and Cupertino High School at Finch Ave., similar to a Traverse City, Michigan example.

The vote was 4-1 with Councilmember Chao voting no, despite her statements in support of the LGBT community.

“I feel pretty strongly that we should show our support that Cupertino is very inclusionary,” Mayor Steven Scharf said. Scharf voted with the majority, despite concerns over potential city liability.

Vice Mayor Darcy Paul also led the council to a 5-0 vote directing city staff to form a task force. That effort will examine future opportunities for outreach and support to the local LGBTQ community.