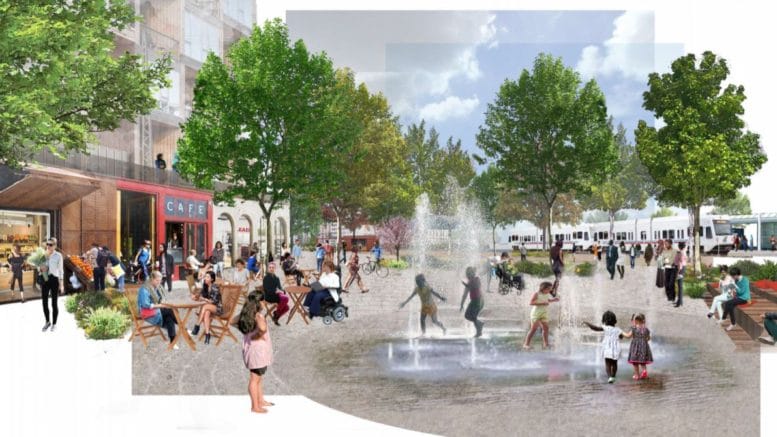 A rendering of part of Google's proposed Middlefield Park development. Image from the Mountain View website.

The company announced plans for a huge development in the city’s East Whisman neighborhood, labeling it Middlefield Park.

“Middlefield Park will be designed as a place that delivers on the City’s plan to create dynamic, connected and seamless experiences for the enjoyment of its residents, workers, and visitors,” Google’s slide deck on the proposal states.

With 11 buildings and two parking garages across the 40-acre site, Google is proposing up to 1,850 homes. Set between Middlefield Rd., Ellis St., and Hwy 237, the plans feature 20% affordable housing units. While building heights are unclear, nearby Moffett Field will limit heights due to Federal Aviation Administration restrictions.

The company says the project will adhere to Mountain View’s Jobs-Housing Linkage Program, aimed at balancing housing and job growth.

VTA’s Middlefield Station is directly adjacent to the site, and plans include a three-acre public park at the station. Sustainability measures include a LEED Platinum designation goal, along with solar panels and on-site battery storage.