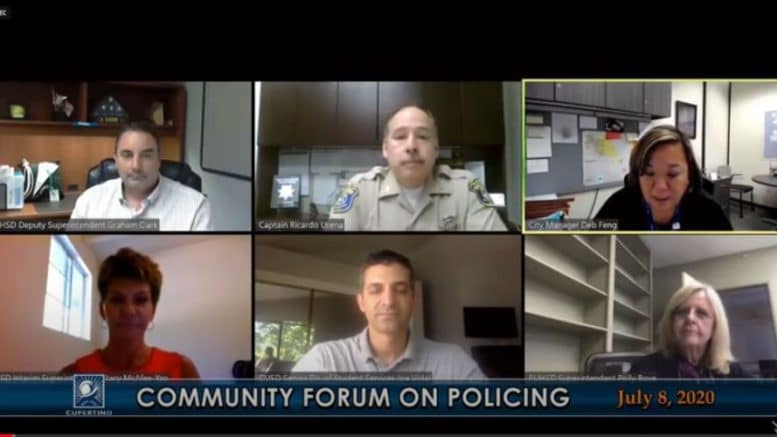 Cupertino continued its public dialogue Wednesday evening with a second forum on policing, this time focused on schools.

The forum covered a number of topics, including the role of school resource officers on campuses. It built on a forum in late June discussing the city’s contract with the County Sheriff’s Department.

Redirecting resources away from police in schools?

One area of questioning was why police are on campuses at all. While school resource officers have been a staple on campuses in recent years across the country, usually in the name of protecting from outside threats, their presence has seen heightened scrutiny in recent weeks.

Bove noted that officers are not regularly on FUHSD campuses except when called for specific situations.

“[School Resource Officers] are not in schools looking for crime. What they are doing is they are trying to guide students in a particular direction,” Urena said in the discussion.

In responding to a question about shifting resources from policing to mental health or drug counseling, Bove shared funding data.

According to Bove, FUHSD spends in excess of $5 million per year on numerous school psychologists, counselors, and social workers. That compares to between $12,000-15,000 per year on calls requiring Sheriff’s Deputies.

“There could always be more services for our students,” Bove said.

All of the panelists spoke about the need for continued dialogue with students, parents, teachers, staff, and administrators.

“Public schools can make powerful agents of change in society,” Bove said. “It is our hope that tonight will be one piece of a much larger dialogue.”

“We’re here. We want to listen, we want to hear, we want to react, so please feel free to reach out,” McAfee-Yao said at the event’s conclusion.