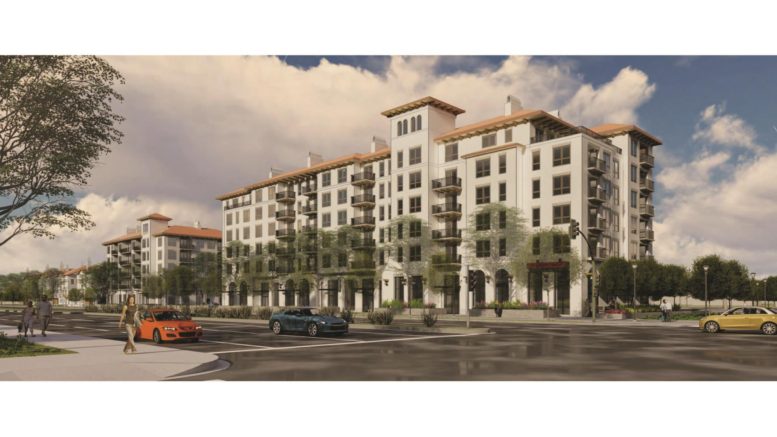 After a four-hour hearing, a major redevelopment project in Cupertino is a step closer to reality.

The development from KT Urban has been in the works for three years. In 2017, a different plan for the area made it to the City Council, which rejected it. After withdrawing that application in early 2018, KT Urban went back to the drawing board.

Plans approved by the planning commission this week have major changes from the 2017 plans. Replacing the outdated Oaks shopping center would be 294 housing units, including 206 senior apartments. Townhomes and rowhouses will make up the remained of the units. 48 of the senior units will be affordable rate.

Redevelopment plans for the existing shopping center also include retail space and thousands of square feet of open space. The site is across the street from De Anza College and the Cupertino Senior Center.

Despite the prolonged discussion about the site plans, building heights, and increased density, the commissioners recognized the immense need for senior-specific housing options in Cupertino.

The development plans to also include a ‘Memory Care’ section, featuring specialized care for those with memory issues. Planning Commission Chair Kitty Moore praised the developers for including it in the new plans.

Westport is the third major development project to get good news in recent weeks in Cupertino, following years of slowdowns. In late April, the City Council approved a new hotel development on N. De Anza Blvd. And, on May 7, the Vallco redevelopment won a significant court case, allowing its development to continue.

Cupertino’s City Council must also approve the Westport plans before it can move forward to permitting, demolition, and construction. The council is expected to review the proposal in June.