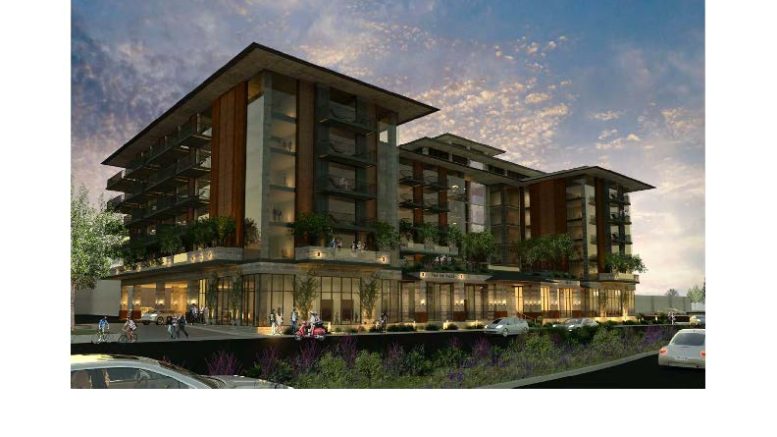 Despite a slowing economy amid the COVID-19 pandemic, two major projects in Cupertino are moving forward.

The long-delayed new hotel on N. De Anza Blvd. finally received approval from the Cupertino City Council on April 21. The project, featuring 155 rooms in a seven-story building, faced repeated slowdowns, mostly due to numerous environmental concerns – raised more than once by project opponents right before a city hearing.

A back-and-forth negotiation on the development agreement between the project developer and the city also delayed progress several weeks. The final agreement requires $500,000 in community benefits from the developer.

If completed, the hotel will also have meeting rooms, a rooftop bar and lounge, and a ground-floor restaurant. The rooftop lounge will be accessible to the public, as required by the development agreement. The hotel will also feature a shuttle to local airports and major local companies.

Council approved the hotel plans on a 4-1 vote, with Councilmember John Willey voting no.

Redevelopment of The Oaks Center

Meanwhile, at the intersection of Stevens Creek Blvd. and SR-85, a significant housing and mixed-use redevelopment is moving ahead.

Known as Westport Cupertino, the new development will demolish the existing The Oaks Center and its retail stores. In its place will rise 294 housing units including 206 senior apartments, of which 48 will feature senior affordable rents. 20,000 square feet of retail is also in the plan. The site is adjacent to the Cupertino Senior Center and Cupertino Memorial Park.

Preliminary plans include a number of amenities, including a restaurant and roof deck.

Mark Tersini, a principal executive with the developer KT Urban, told the Mercury News, “Westport Cupertino provides a real opportunity for the city to address the challenges created by the recent housing crisis, while also meeting the needs of a segment of the population with unique housing requirements.”

Cupertino’s Environmental Review Committee approved the project plans at its April 16 meeting. It was the Committee’s first meeting since December 5, 2019.

The project now moves to the Planning Commission for review before it could come to the City Council.