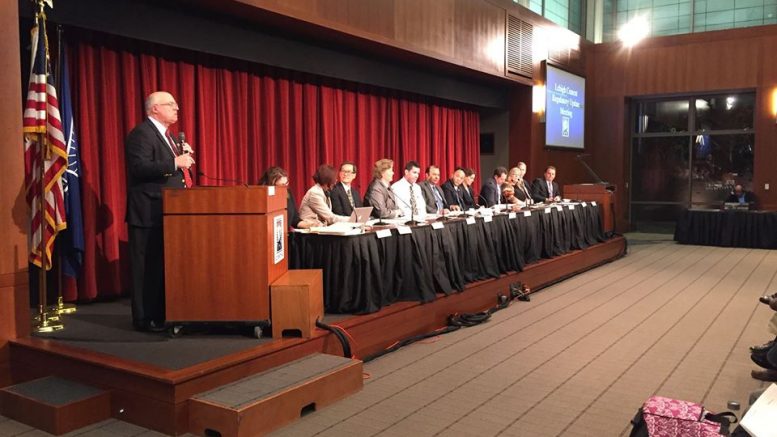 The event, held in Cupertino Community Hall, will be moderated by Simitian and will feature a panel of speakers from the myriad government agencies that oversee and regulate the company. Residents who attend can submit questions to panelists from the agencies.

The meeting comes as interest has piqued again from residents, the City of Cupertino and County of Santa Clara over activities from the Lehigh property, which has been in operation since 1939. Lehigh held two community open houses this month giving residents the chance to ask questions of it staff and learn more about its operations.

Over the past few months, the City, County, Lehigh and Stevens Creek Quarry have been mired in a slow-building dispute over trucks hauling purchased aggregate between the quarries. Earlier this month the County demanded that trucks stop hauling the material.

Many of the trucks had previously been off Cupertino streets and were running in between the quarries on a modified road on Lehigh property. The County in August, however, issued a notice of violation, saying the road was an unpermitted use. In November, Lehigh submitted an application to the County for a new road, but announced last week that it has rescinded the application. Lehigh instead is focusing on a Reclamation Plan amendment to again allow use of the current internal access road.

The order to stop carrying aggregate from between the two quarries came at the request of the City of Cupertino alleging it was an environmental issue and that the trucks were a nuisance. The County issued Stevens Creek Quarry a notice of violation for accepting aggregate on an unpermitted parcel on the property. This, for now, has reduced truck traffic between the properties. Stevens Creek Quarry will need to secure a new permit, according to the County.

The public received an update on the matters involving the two quarries on Feb. 21 during the County’s Housing, Land Use, Environment, and Transportation Committee. Erika Guerra, the Director of Environment and Land Management Resources for the West Region at Lehigh Hanson, told the committee that “there is no question that Lehigh has the vested right to sell aggregate.”

Guerra added that the City of Cupertino’s suggestion that Lehigh did not have the right to sell “unprocessed” aggregate was distinction that “does not exist.”

“Aggregate is not made from any specific rock type. Any rock type found at the quarry can be used for aggregate,” she said. “The amount we have sold to Stevens Creek Quarry is well within the volumes of aggregate that we have sold historically.”

Though the committee only received an update and took no action, the meeting brought out Lehigh and Stevens Creek Quarry employees and supporters to praise the operations as vital resources for the local economy.

“Our family’s land, our business and our union employees have produced the aggregate that has built Silicon Valley into what it is today. Locally sourced aggregate is the most environmentally sound way to build and maintain our cities’ infrastructure,” he said. “Please understand that local is the key. It reduces traffic congestion as trucks can do shorter hauling distances, which are both critical elements to limiting the environmental impact as well. Furthermore, being local inevitably reduces costs which allow progress and jobs to remain here locally.”

Some speakers came from local businesses like Philip Albanese, a representative from J.J Albanese construction company and spoke of the quarries’ regional value. Lehigh employees reminded the committee about upcoming major projects that will require local materials.

“Please not only consider the future of our jobs, but the entire future of Santa Clara County as you decide today. Please consider all the cement and aggregate needed for the project to build BART to downtown San Jose, the projects for the SB1 transportation bill for the County, and the affordable homes you want to build,” said Gina Leyte, a reliability manager at Lehigh.