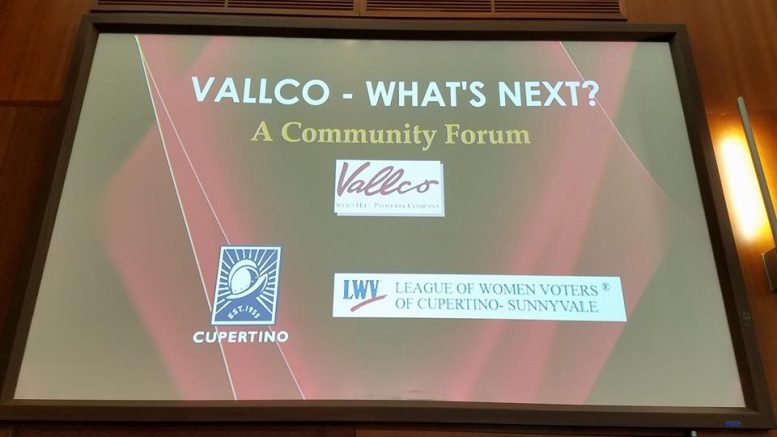 The future of Vallco was discussed at the community forum held on May 14. Photo courtesy of League of Women Voters of Cupertino-Sunnyvale Facebook.

A community forum Monday sponsored by the League of Women Voters of Cupertino-Sunnyvale and listed as part of Affordable Housing Week in Silicon Valley focused on providing residents with information about the future plans for the nearly empty Vallco Mall.

The proposed project of the mall’s owner, Sand Hill Property Company — called The Vallco Town Center –calls for the construction of 2,402 housing units for sale and rent – half of which would be set aside as affordable for low or lower income residents. This project, compliant with State Law SB 35, would increase Cupertino’s affordable housing stock by 10 percent, and boost the city’s below-market rate inventory by 460-percent, providing a solution to the region’s growing housing crisis, said Sand Hill managing director Reed Moulds, one of several panelists who spoke at Monday’s forum.

During Monday’s forum, Superintendent Bove spoke about how FUHSD would benefit from development at Vallco as it would provide the district with an additional $6.5 million annually in property taxes. According to Bove, Vallco’s housing element would also generate extra students and more state funding for school districts. Not so long ago, neighboring school district CUSD announced that it expects to experience an enrollment decline of more than 1,200 students in the next five years and budget cuts up to $5 million, according to enrollment projection consultants hired by the School Board.

Panelists also discussed the motivation behind a separate, city-led community planning process running in parallel with Sand Hill’s project. Parolek of Opticos Design, the lead consultant for the community planning process, claimed there is a lack of community support for the development of a green roof at the Vallco site. An April 24 poll conducted by Cupertino Today staff ran contrary to that assessment, with results showing 89 percent of respondents like the idea of a rooftop park, with 45.7 percent saying the idea is “great.”

The second and last Vallco Design Charrette, as part of the city-led planning process, will take place from May 20 through May 24 to develop a preferred Vallco Special Area Plan.