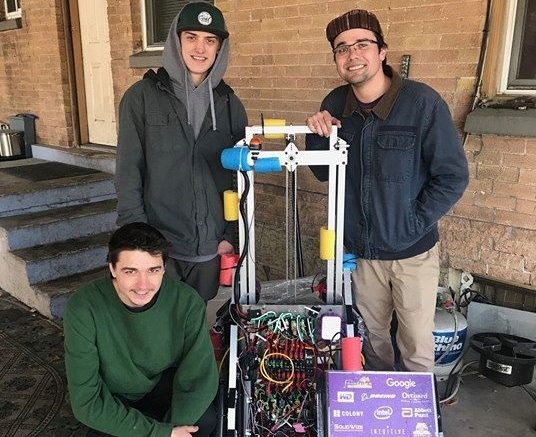 Pictured are Michael Kolesky, Alex Velazquez, and Nick Wojtalewicz, who found our robot.

The Monta Vista High robotics team happily announced Tuesday night that their robot, which was stolen at a Utah hotel over the weekend, has been recovered.

“Early [Tuesday], the robot was found by a good Samaritan in his front yard, several miles from the hotel we were staying at in West Valley City,” the team said in a Facebook post. “While we are unaware of the current condition of the robot, we are enormously relieved that the robot has been found and look forward to welcoming El Toro XXI home soon.”

The team was in Salt Lake City last weekend to compete in a robotics competition when, overnight at its hotel, its trailer was hauled away by thieves. Earlier Tuesday, law enforcement in Utah found the trailer, but the robot as well as pricey tools had remained missing.

Built entirely by students, the robot was estimated to be worth up to $50,000.

“Once again, we are incredibly grateful for all the support we have received in the last 48 hours,” the team said.