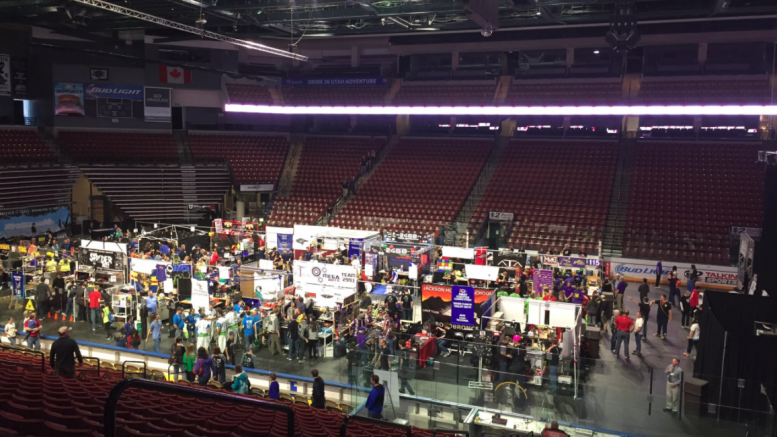 Photo courtesy of Monta Vista High Robotics Twitter from the 2016 semi-finals in Utah.

The Monta Vista High robotics team’s trailer was stolen outside of their hotel in Utah, which contained the robot they built, estimated to be worth up to $50,000, and thousands of dollars in tools, according to FOX13-Salt Lake City and the San Francisco Chronicle.

The team was in Salt Lake City last weekend to compete at the FIRST Robotics Competition Utah Regional at the Maverik Center. The good news? On Saturday, the team won the entrepreneurship award and advanced to the contest’s semifinals, according to the Chronicle, which contacted team mentor John Yelinek.

But as the team prepped to return home Sunday, Yelinek discovered the trailer he had parked behind the hotel on Saturday night was missing. Local police say security cameras captured a stolen blue pickup truck pulling the trailer from the hotel parking lot.

The loss of the robot, named El Toro XXI, is devastating to the Monta Vista High team, which worked many hours since January to build it, Yelinek said. It is also a blow to the team’s season — they are supposed to compete with the robot in Boise later this month.

“They must receive an exemption to build a replacement to compete in Boise later this month,” FOX13 reported.

Yelinek told the news station, “They are so resilient; if they have the opportunity to build a robot and compete again, they will. They are phenomenal kids.”