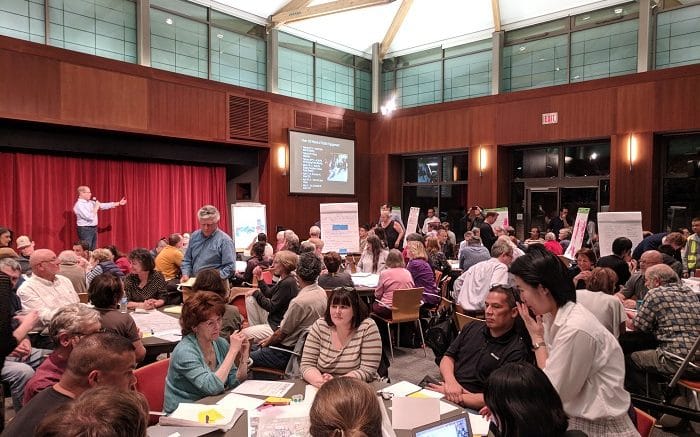 Nearly 170 people attended the kick-off event for a series of public input meetings for the Vallco project on Monday night.

The meeting, led by Cupertino’s lead consultant Opticos Design, featured a “Vision Wall” where participants were asked to use Post-it notes stating what they’d like to see happen at Vallco. It also included “round robin” group exercises, which encouraged each table to write and share their thoughts on the current state of Vallco and what they hope to see in the future.

When asked to share their ideal vision of the Vallco mall property, every table predominately agreed on the need for more affordable housing. Attendees also expressed the desire for more community meeting space, an entertainment center, parks, retail and transit.

Many believe that with the development of these features, Vallco will become a vibrant community center for people to live, work, shop, dine and enjoy. Everyone in the room seemed to agree Vallco has the potential to again be a place that the community can be proud of, a “catalyst” not only for Cupertino, but for the entire region.

The discussion over Vallco mirrors the sentiment in other Bay Area cities that are looking into or moving forward with various developments aimed at relieving the regionwide housing crisis.

Santa Clara is eyeing a development proposal that would bring a nearly 10.5 million square feet development with space for office, retail, housing and a new hotel to the former Yahoo! site, according to the Silicon Valley Business Journal. Meanwhile, a developer in west San Jose is proposing to build an urban village with 300,000 square feet of office, about 20,000 square feet of retail, and nearly 600 housing units.

Mountain View has approved a plan to add nearly 10,000 housing units to the area, including 1,970 units priced at below market rate, according to the Daily Post.

The rest of the Vallco design process will aim to involve the community with meetings throughout February, March and April that will be open to the public. The next public meeting involving the Vallco Special Plan Process is set for Feb. 22.