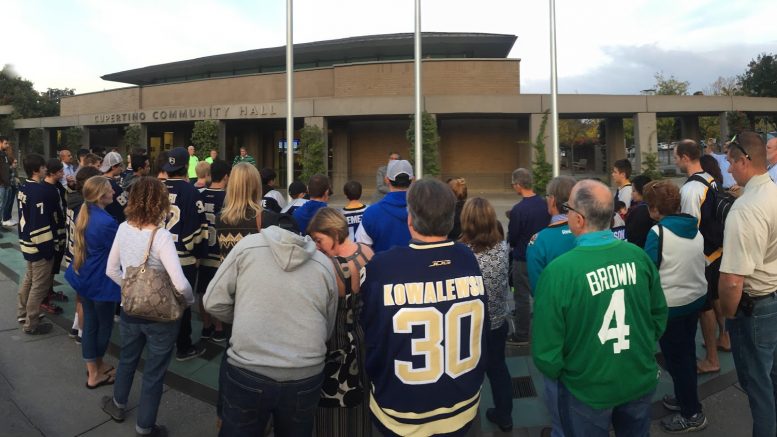 Neil Struthers, a representative of the Santa Clara County Joint Electrical Industry Fund, addresses a group of supporters of a redeveloped Vallco as they enter Cupertino Community Hall.

A large group of community members and representatives from local unions rallied before and spoke during public comment at this week’s City Council meeting in support of the recently announced re-engagement of the owner of the empty Vallco Shopping Mall to redevelop the site.  The regularly scheduled meeting took place last Tuesday at 6:30 p.m. at Cupertino Community Hall.

“I ask the city council, city staff, and Sand Hill Property to work together in an expeditious manner to develop a Specific Plan,” said Sabrina Rizk, author and Cupertino resident. “It’s time that we have what we envisioned in the Plan, which is a mixed-use project and something that the community can gather at and be proud of once again.”

Tuesday’s Council session was the first since Sand Hill, owner of Vallco Mall, submitted a formal request to the City to restart the process to redevelop the ghost mall. Upon receipt of that letter, Mayor Savita Vaidyanathan said she wanted “community engagement right from the get-go in a positive and productive manner that results in a creative solution that will benefit our whole community.”

Many community members expressed the need for more housing in Cupertino, especially for low income residents. Pete Heller requested that when redeveloping Vallco, there should be a “significant proportion of the housing that is below market rate so we can have our service workers, our teachers, our policemen, etc. live within the city bounds.”

There were a handful of people who spoke in opposition to any planning process for the mall, often taking aim at the City and their summertime speaker series Creating Community Together. Caryl Gorska called the City-led panel discussions about growth, retail, housing, and transportation a “sham”, notwithstanding the participation of over a dozen independent experts from across the region who testified as to the obsolescence of the single-use indoor mall and the need for mixed-use, especially housing. New Council member Steven Scharf, known for authoring the failed Measure C, which sought to prevent any change of use of the mall, also seemed to share that minority opinion Tuesday night, commenting that future expert input should be “more impartial”.

No further announcements about the next steps for Vallco were made.

Youth hockey players from the California Cougars Ice Hockey Club said they would like to see a new ice rink as part of a redeveloped Vallco.