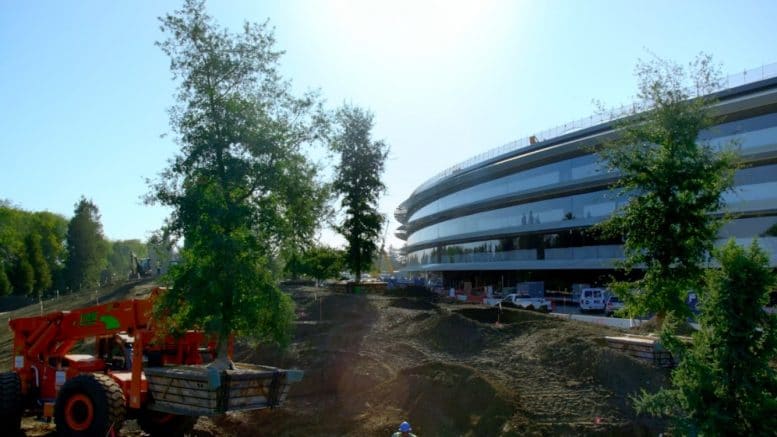 Construction of Apple's new company headquarters in Cupertino, a 2.8 million-square-foot ‘spaceship’ building with room for 12.000 employees.

Over the course of the last several months, new restaurants have opened and expanded near the Apple headquarters in Cupertino.

According to The Mercury News, seven eateries have popped up since Apple started construction in 2013. Check out the list below to learn about what’s reinvigorating the neighborhood’s restaurant scene.

A fine dining interpretation of the classic American steakhouse with hints of Japanese influence, Alexander Steakhouse features imported wagyu beef and Greater Omaha® Beef, corn-fed from the Mid-West.  The award-winning restaurant is has locations around the world, including Pasadena, San Francisco and Tokyo. Their Cupertino restaurant was originally located in the Vallco Shopping Mall complex, but recently moved to neighboring development Main Street Cupertino.

Coconut’s Fish Cafe caters to the whole family with a Hawaiian-themed menu of delectable eats including salads, fish and meat tacos, poke bowls and more island inspired favorites. The chain originated in the Hawaiian Islands but has since opened stored in Sacramento and Los Angeles.

Cupertino residents can now enjoy fine pizza and Southern Italian cuisine from Master Pizzaiolo Alberto and co-owner Gianni. Be sure to check out the restaurant’s 900-degree brick oven, which is as authentic as the Neapolitan pizza it serves.

Craving something sweet? The artisan handcrafted ice cream rolls at Icicles is sure to hit the spot with natural and wholesome ingredients. The shop makes the ice cream in front of their customers, delivering a fresh, made-to-order dessert to fill any craving.

Lyfe Kitchen merges fine dining and fast casual a contemporary experience sure to become a staple for Cupertino workers. The restaurant serves health-minded, globally inspired food made with local ingredients such as sharable flat breads, soups, salads and desserts.

Recently lauded for its rotating beers on tap and flat-screen TVs, Steins Beer Garden features 31 taps of craft and imported beer. A modern take on the classic German biergarten, Executive Chef Colby M Reade merges a robust beer list with modern american gourmet comfort food, which is sure to please.

Specializing in the obscure and delicious highlights of Italian food and wine, Enzo’s makes their authentic desserts, pasta and focaccia bread themselves while the rest is carefully sourced from Italy. Be sure to check out the happy hours Monday through Saturday from 3:00 p.m. to 6:00 p.m.